I normally don't have that many weird lines going on when I smile, but really the sun was setting and we were looking directly into it. I should've done the wink thing like Stephen, but hey, he's the more "smooth" one of the two of us. 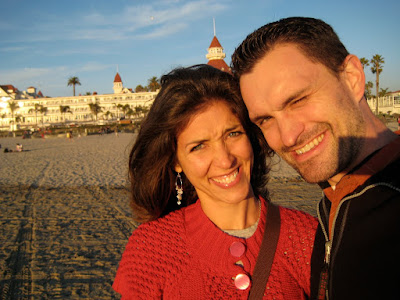 So here's the scoop. We celebrated our 8-year anniversary with a visit to Coronado. It has been high on my list of San Diego sights to see. Both Stephen and I had never been there before and it was nice to enjoy it for the first time together. We both just thought the only thing on the island would be the famous and huge Hotel Del Coronado. When we got there, we were like, "Hey, there are houses here. People live here?" We both thought it was just one big vacation destination. They had their own fire station, city hall, would-be-library-turned-used-book-store. 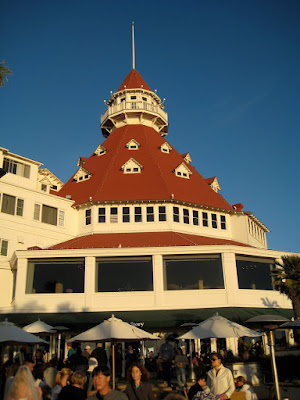 Without a doubt, the Hotel Del was where anyone and everyone was . Besides the original rooms, there were also individual villas (not pictured) that looked pretty sweet. The only downside to staying in one of those was that they faced the ocean (duh), but they also were right along a huge walking path, separated by a white iron fence where everyone on the path had a full view of all the people chillin' in the back yard of their villas. Basically, no privacy. 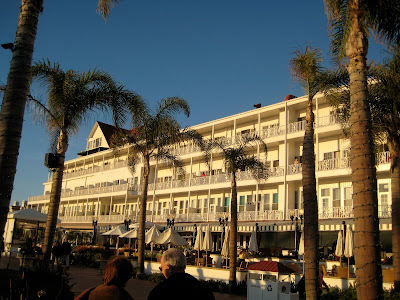 We were going to do some ice-skating by the sea, but felt that just people-watching was good enough for us. 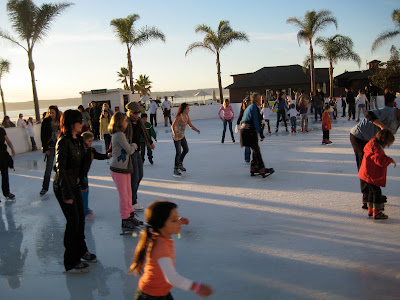 Here's a view of the hotel from the shore. To the left of the main hotel, you can see the beginning of the villas. 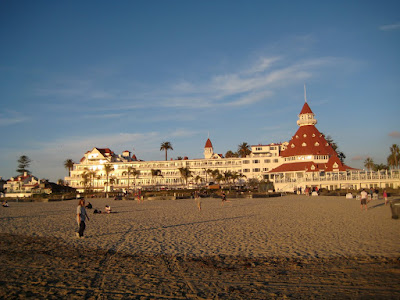 Oh yes, and Stephen decided to let his facial hair/pins and needles grow, in true holiday fashion. Ouch for me! It was fun to see him shave off different patches after that as he experimented with different looks. Some were better than others... 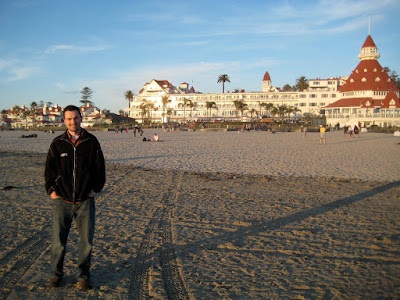 A gazebo in the courtyard. From this area, the rooms looked like they were all on one big ship. 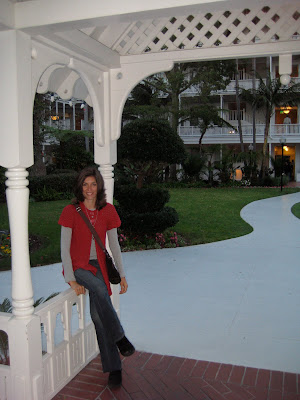 The main Christmas tree in the lobby. It must have been, I don't know, 20 feet high? It was fake, of course. 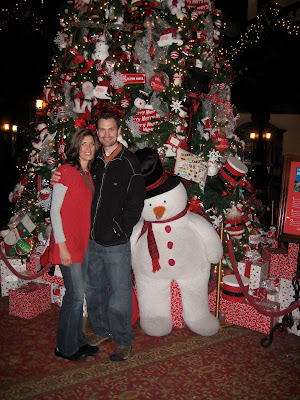 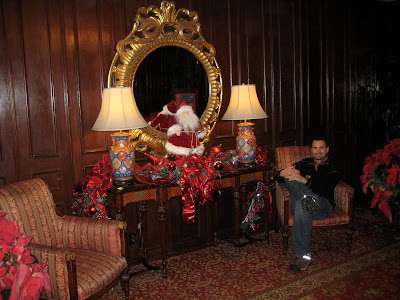 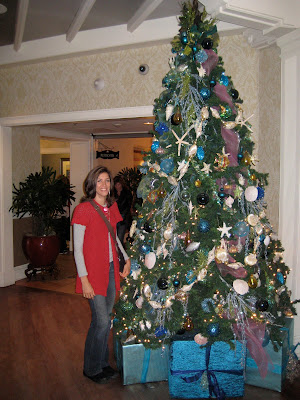 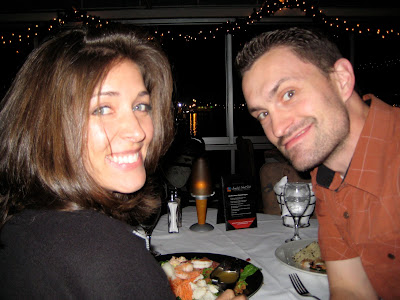 Us, eating dinner at Peohe's. A yummy seafood place with a view of the water and downtown. I told Stephen to take a mental note of my plate after dinner, because it doesn't look that way often. It was actually NOT clean. Maybe it was because we polished of the whole platter of appetizers first and because I was trying to save room for our molten lava cake that we shared for dessert. What a splurge! 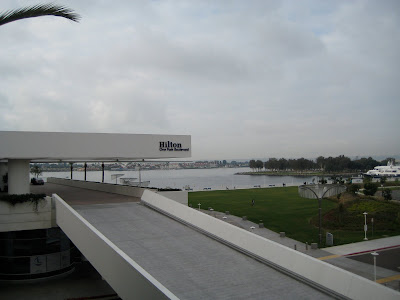 This is one thing that we could see on the night skyline, across the water from our restaurant that night. I didn't think we would actually be going there. My expectations were fully met with the delicious dinner, and window-shopping time with my husband. We hit up the 5-story Horton Plaza, contemplated catching a movie, but instead meandered around downtown back to our car, passing drunk party-goers, the gas lamp, smokers, and hooka-lounges (ewe!). The funny thing is, we parked a few blocks away from Horton Plaza because the signs on the parking garage for the mall said "Free Parking, after you spend $500." Yeah, right, we thought. Who really does that? Then when we were at the mall, we saw a sign with all the different locations of parking validation machines. I guess maybe I took the sign in the parking structure too literally. For our far-away spot, we paid 3 bucks.
So I was ready to return home when Stephen suggested we go to the hotel. I was totally NOT into the hotel idea because a)the cost and b) I was not prepared. I thought that the hotel option was ruled out once he didn't ask me to pack my bags, nor did he pack them for me. What kind of person usually, just "shows up" without any luggage at a hotel??? Yes, there is a specific type, and that is not me. As I was reasoning out of the idea, I finally decided that at the very least, I could not spend the night somewhere without my toothbrush and toothpaste. Stephen pulled into the temporary parking near the front lobby anyway. He went in to check if the rates he saw online were still available. I waited in the car. As he got back into the car, he tossed me a free toothbrush and told me the toothpaste was already in the room. I told you he was the smooth one.
Posted by Desirae Badger at 9:47 PM

Wow! What an awesome night! We went to PEohe's on our anniversary... best restaurant in San Diego... well, I think. You guys have great taste! Congrats on 8 years!

You guys are so darn cute!!! I hope I am as hot as you after two babies Dezi! Love you guys!!

You guys are so darn cute!!! I hope I am as hot as you after two babies Dezi! Love you guys!!

AWESOME! Im so glad you are part of the fam Desirae!! I love ya!

What a great place. Evelyn and I have been there and had lunch overlooking the sea and ice cream cones later. I love the spontanity of your visit. WOW. BADGER DAD