We Love You, Grandad! 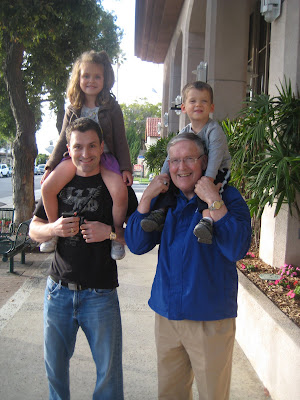 We have been SO SPOILED to have had personal visits by Grandad twice in the last month! Thank goodness for VHA and whatever other conference or Hospital group that just HAD to have an event in San Diego this summer! Wahoo!
Since grandad's flight was delayed a few times on his way over, he arrived right around dinner time. Naturally, our first order of business was to find some GOOD FOOD! We thought we'd hit up the famous PHIL'S BBQ, but were quickly turned away by the line that wrapped around the outside of the restaurant. Let me mention, that we found this after having first reported to a bad address. We weren't getting anxious to eat or anything... yeah right! Next choice, how about Wahoo's Fish Tacos? I think there's one in downtown La Jolla. Oh man, was parking quite the fiasco! We just took the first free 2-hour parking zone we could fine, as I shielded the men's faces from the Victoria Secret propaganda that welcomed us on the curbside. So, unfortunatly, Wahoo's would have been about a mile walk from our parking spot, so we were onto plan C. A Mexican Restuarant, recommended to us that was not far away. The food was decent, my pictures of us there was not great at all, other than it captured the colorful tile of the table. Stephen and Ted were such good sports to hold the kids on their shoulders while we wandered around like clueless tourists. 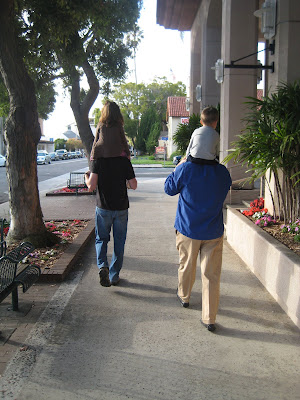 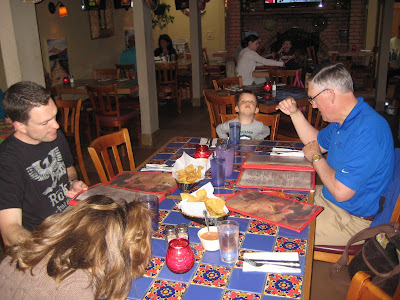 Here we are dressed in our Sunday best! Ted even got to hear Stephen speak as the high council representative in our ward that day. Funny coincidence! And in case you're wondering, NO, I didn't force Brooklyn to wear THE dress again. I think she actually likes it! 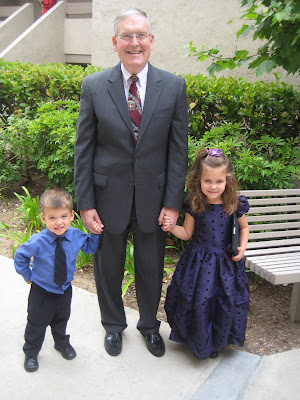 We hadn't seen enough of Grandad yet, so we had to venture off and test out the pool at his hotel the next day (Monday). The pictures are out of order here because we swam before the carriage ride and dinner. Actually, Stephen and the kids swam. I chatted with Cindy about her move to Louisiana from Virginia. 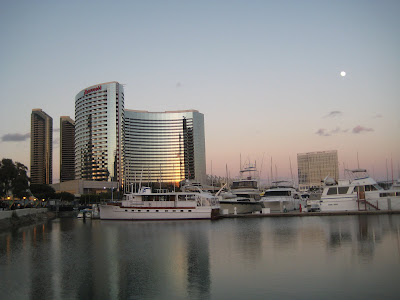 There's Grandad's hotel, the Marriot, from a little distance away. 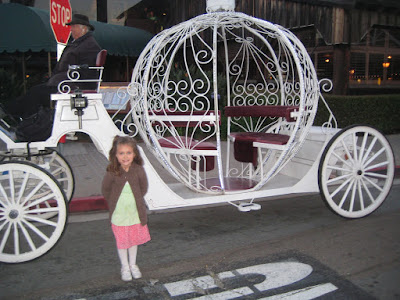 Speaking of SPOILED...I had Brooklyn pose by this horse-drawn carriage just for the picture. However, Grandad had to escort us all in and treat us to a nice little old-fashioned stroll around the park! 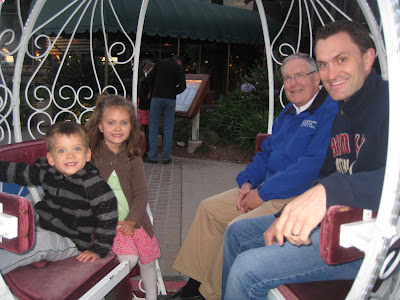 We saw a nicely dressed wedding party taking some pictures. Most of them, particularly the men, were very drunk. I am so glad that was not our wedding story. 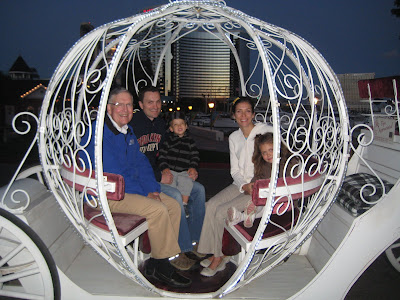 Here was my scene as I chatted with Cindy. I am so glad Stephen is such a great sport about taking the kids swimming. It wasn't the warmest evening. In fact, it rained the next day. 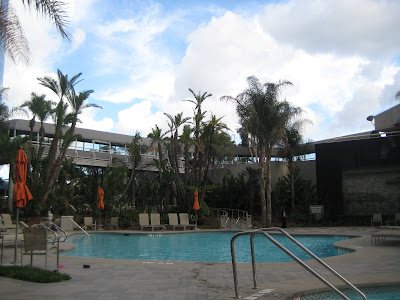 Here's the inside of the Fish Market restaurant. I was in 7th Heaven! I love eating fish and feel so jazzed when I get the opportunity to indulge...especially when I'm not the chef. The decor was, well, as you can see, fishy. There were replicas of Marlins and old photos of fishermen doing their thing in good ol' San Diego. One thing that I had no idea about was that TUNA fish are huge, huge huge! 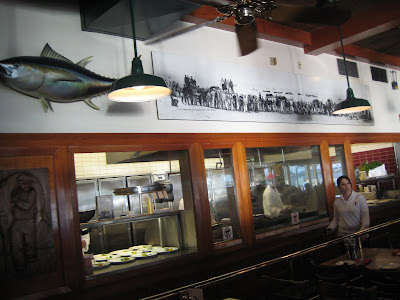 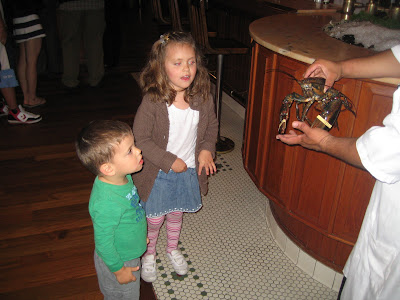 And on our way back, we had to take a quik pic. of this boat because of it's name. I'm wearing a little white flower that Brooklyn picked for me on the way home. 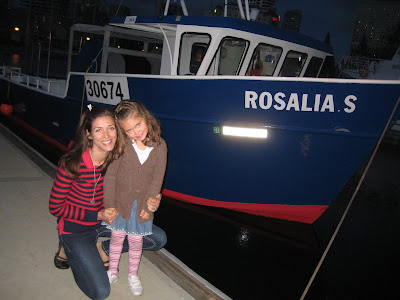 Grandad, thanks for the visit and for treating us to dinner!
Posted by Desirae Badger at 10:55 PM 1 comment: 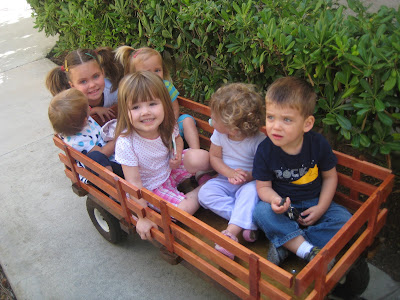 It was a great day for earning lots of tickets! Thanks for the handy home made wooden wagon Dad. It really comes in handy on days like this!

The story
So I decided to fill in someone else's shift for co-op this day. And what a day it was! I had a total of 5 extra kids (7 including my own). The other child not shown is in a Baby Bjorn that I am wearing. I got QUITE a few long stares at the mall as we all paraded through. I thought it would be a great idea to let them run around in the children's play area. However, once we got there, the children gradually drifted away from the designated play structures to explore all kinds of various other sights, in all directions away from the play area, so I had to abruptly end the phone conversation with my sister and corral the children back into the wagon for the return trip home. A week or so later, my sister called me with the exciting news that her two new next door neighbors (Pip just moved to a house in Murrieta) were not only members of the church, but also involved in money-saving baby-sitting co-op. Lucky for her, she had a small taste of the experience vicariously through me. We both had a good laugh about it.
Posted by Desirae Badger at 10:08 PM No comments: