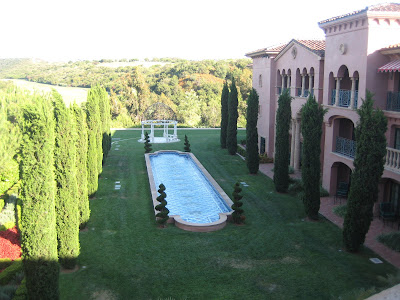 We enjoyed touring the beautiful grounds of the Grand Del Mar Hotel where Grammy and Grandad stayed during their visit for Grandad's conference. So fancy! So not someplace we'd be staying on our own dime! Maybe someday... here's for dreaming, right? 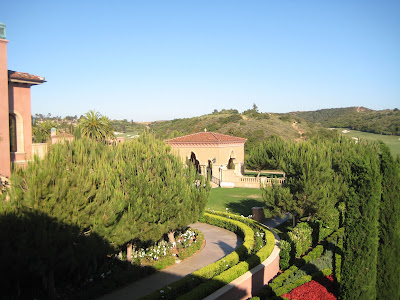 Evelyn and I posing by the pot full of fresh blooming roses. 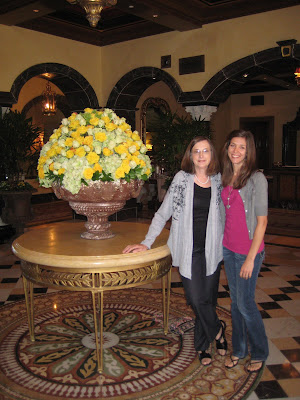 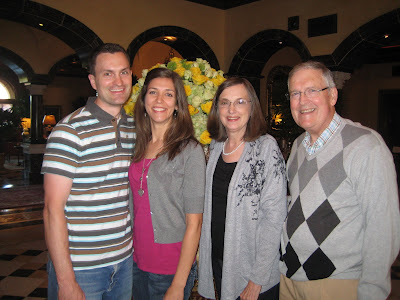 Engagement photo, anyone? Ha! No, I think engagement pictures need to be a little more lovey-dovey with an occasional shot of kissy-face. 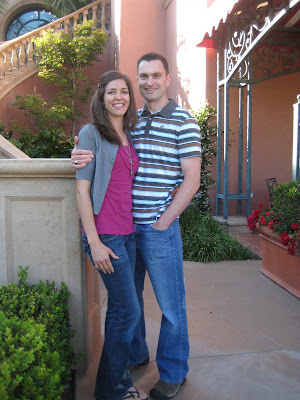 Aaaah. The fountain of youth! It almost looks like we're young enough to not have a care in the world. Wait a minute. Not possible. We have children. 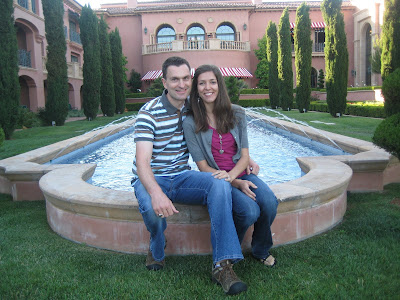 "Put that camera away and enjoy the movie already!" Okay, you should all know by now that I can't just put my feet up and watch a movie while someone else is staying up watching my kids at their house! Not even that. I just can't usually sit still long enough to just watch a movie. I've got issues, I know. 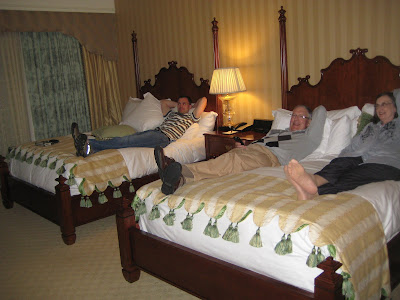 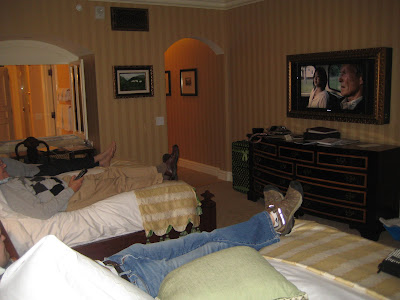 Thanks for the delightful evening and dinner, Ted and Evelyn! The food was so delicious! I wished I would have eaten it a bit more slowly. That fancy fish fillet just vanished way too quickly off my plate! It was sweet of y'all to let me sample your stuff though. ;) And Grammy, I give you props for sharing your dessert with no one. I love a woman who knows when to put her foot down. ;)
Posted by Desirae Badger at 11:16 PM No comments: 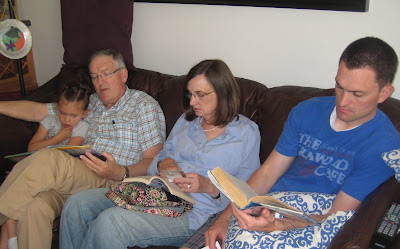 This scene was found one afternoon during the visit. I loved it. Thanks for sharing with us your love of learning and reading, Grammy and Grandad! What a legacy!
Posted by Desirae Badger at 11:13 PM No comments: 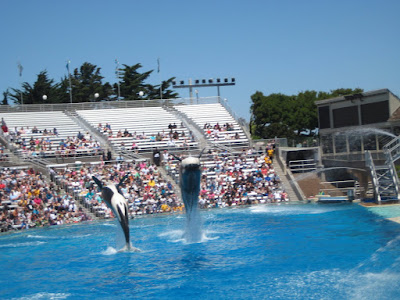 After the "big" preschool graduation, Grammy and Grandad treated us to SeaWorld. This was a huge treat for us because in the 3 years we've lived in San Diego, this was our first visit to Sea World. Interesting fact: SeaWorld is about 10 miles away from us. Basically, we've only bought zoo passes to this point because they're so much cheaper. Why is it that sometimes I feel like a tourist in my own city??? 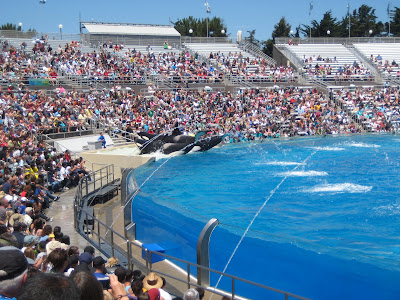 The Shamu show was pretty sweet. 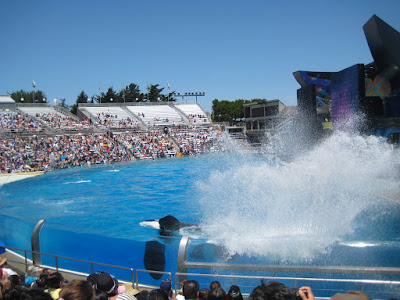 Here's one of the whales splashing the audience. 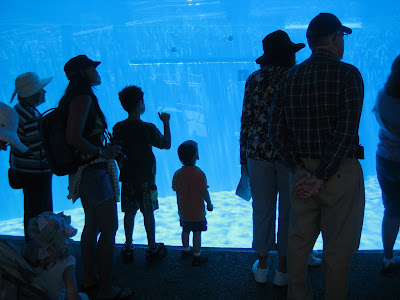 This is a viewpoint of the big tanks where the killer whales chill while they're not performing in a show. Of course while we viewed, we heard and read some interesting facts about killer whales....Somebody stop me before I bust out the whale trivia! 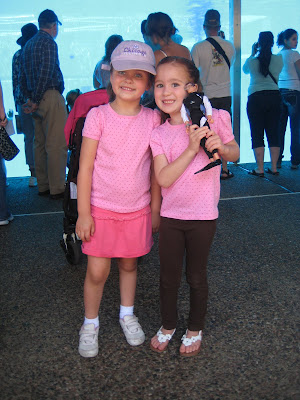 Here was a cute coincidence. This little girl we bumped into was wearing the exact same shirt as Brooklyn. Her parents were much more doting than we are with our tomboy Brooklyn. Her hair was perfectly coiffed, and did she know how to pose for a picture or what? Her mother or grandmother shared with us that this little girl had just filmed a commercial the day before. I wish I remembered which one, some Maytag commercial or something if I recall correctly. 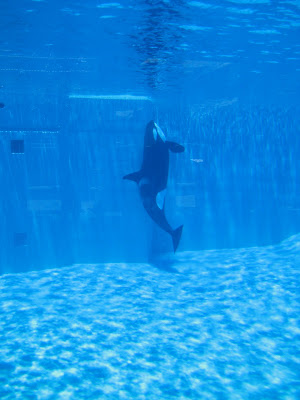 Here was one of the oldest whales at the park. He likes to bob up and down in the water. Funny, no? 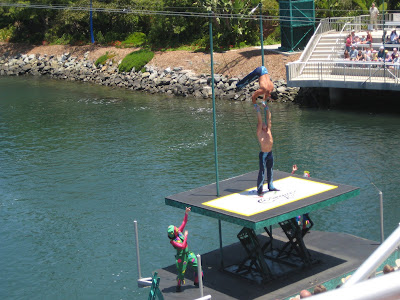 I was pretty impressed by these acrobats performing in the style of Cirque de Soliel.
Below is another scene from the show. 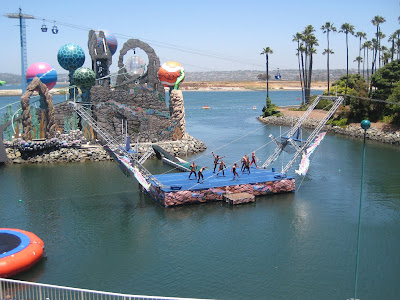 Brooklyn checked out the starfish in "Discovery Reef." I'm embarassed to admit that I totally played the unintentional starfish police b/c I heard a worker announce that the starfish needed to be kept inside the water in order to "breathe." Kids kept wanting to pick them up and take them out of the water to pose for pictures though. So I got worried whenever I saw some kid grab one out of the water. I tried to hold back, but couldn't keep it down, "I think those are supposed to stay in the water so they can breathe." I'm sure the starfish survived though. 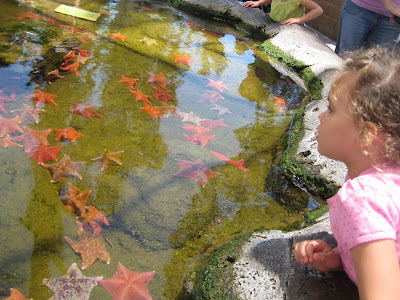 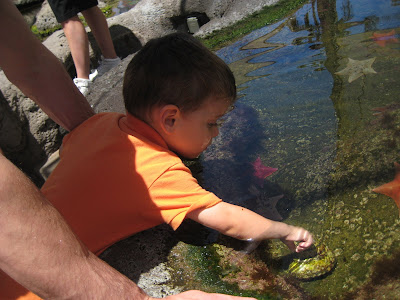 Seeing everyone else pick them up, Brooklyn tried the same thing. Don't worry, I was right there to defend the little 5-pointed animal! You can thank me later, little guy! 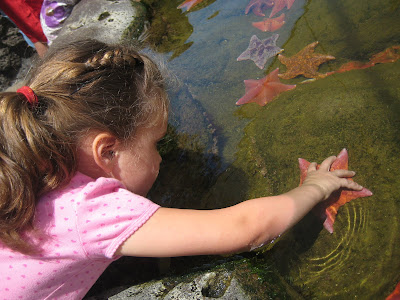 The "Sea Lions Live" show. It was pretty funny because it parodied many of the other shows at the park. I finally learned the difference between Sea Lions and Seals. Not that it was part of the show, but my friend Lucynthia shared this with me on my more recent trip to SeaWorld. Sea Lions have longer limbs, flaps over their ears, and the use their fins to maneuver. Seals have shorter limbs, move in floppy motions without much help from their short limbs, and they have no flaps over their ears. So basically, I just remember that Sea Lions do things closer that of 4-legged animals like lions. They use their limbs.
All in all, this was a wonderful, pleasant, entertaining, and MUCH overdue trip to SeaWorld made possible by our ever overly-generous Grammy and Grandad. Sadly, I didn't get any pictures with THEM facing the camera at SeaWorld, but the next post will surely compensate for that as we got plenty of photo ops at our nice dinner at their hotel. ;) 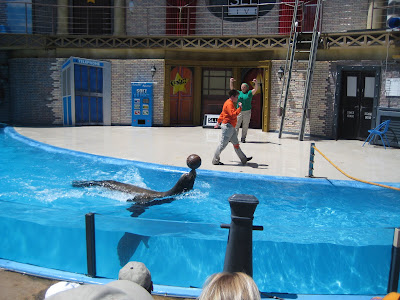 Posted by Desirae Badger at 10:25 PM No comments: 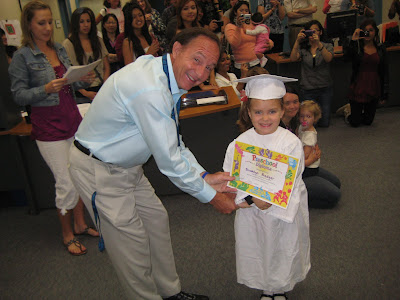 Grammy and Grandad were supportive enough to join the early-morning graduation ceremony at the high school where Brooklyn attended preschool. I'm sure it rivaled in pomp, triumph, and achievement David's medical school graduation that they attended earlier in the week. Or not. 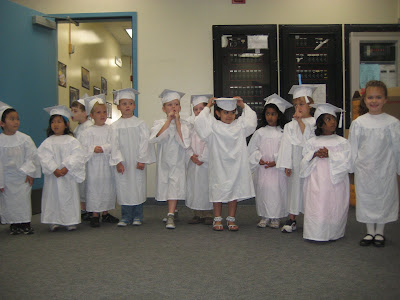 We enjoyed their presence and their support nevertheless. 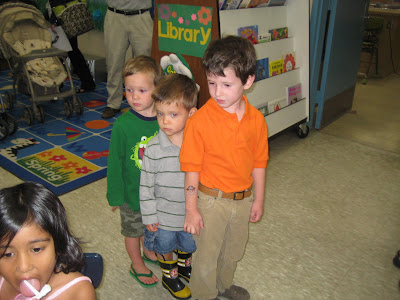 After the ceremony, Ian and Graden waited patiently in line for some refreshments while the big preschooler boy ahead of them didn't notice that the line was moving ahead without him. 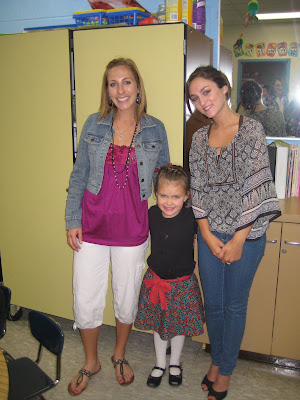 Here are two of Brooklyn's official preschool teachers. There were several more high school students who gave plenty of individual attention to each of the twelve preschoolers. 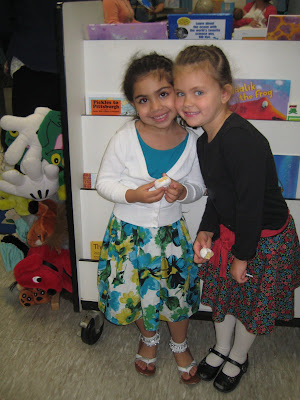 Here's Brookie with her buddy Ariana in front of a book display shelf. 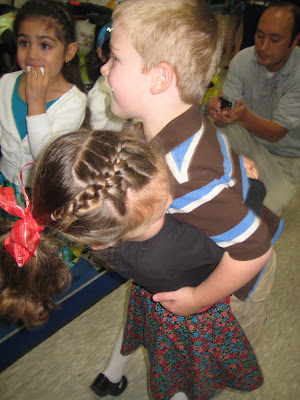 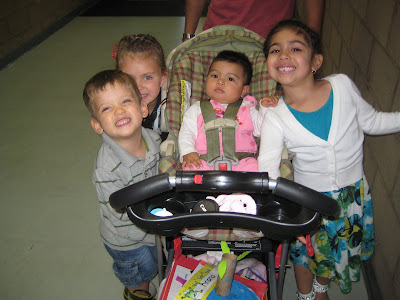 The kids with Ariana and her baby sister Aniyah.
Posted by Desirae Badger at 11:04 PM 2 comments: 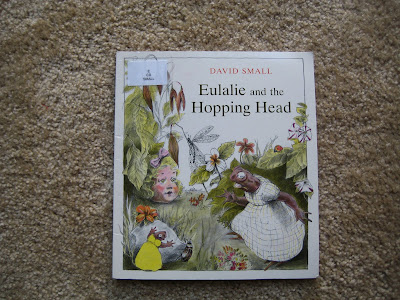 This book's unique title caught my attention. It is not as grotesque as it seems though. It's about two animal mothers. One is very "careful" and has total control of her 8 perfect children. She persuades a toad mother (who is less perfect because her child is busy and messy) to adopt this perfectly-behaved, but abandoned child (doll-head). The only problem is that this "perfectly behaved child" never speaks, eats, or does anything but stay in one place with one expression until Eulalie (the busy/messy child of the toad mother) gets stuck inside of it and brings it to life. Mothers and children alike will appreciate this adorable tale of loving our family members, imperfection and all.
Posted by Desirae Badger at 10:57 PM 1 comment: