I was overjoyed that someone actually responded to one of our "lost jacket" signs posted in every laundry room of this Student Housing complex (Mesa) where Brooklyn left her jacket a couple weeks ago. While we were there retrieving the jacket, we hung out at the playground for a while and had the place all to ourselves at first. It was really fun to just hang out with my kids at the park, I don't know why that was a bit surprising to me, but the Mommy-and-me playtime was indeed refreshing. 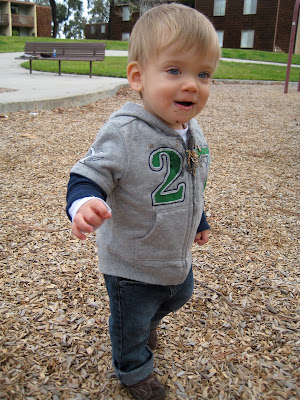 I couldn't capture any of Ian's flashes of smile, but dang, the kid has me whooped on him. I admit that I'm a total pushover when it comes to keeping him happy. That means a lot of our dinners are cooked one handed by me as he "supervises" perched on my other arm. 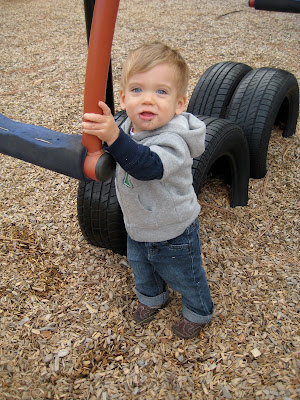 He's overdue for a haircut, but I'm pretending to go for the grunge/surfer look. Really though, I just can bring my self to use the buzzer thing that I use for Stephen and I also know that the wiggle worm does NOT sit still when I'm holding hair-cutting scissors. 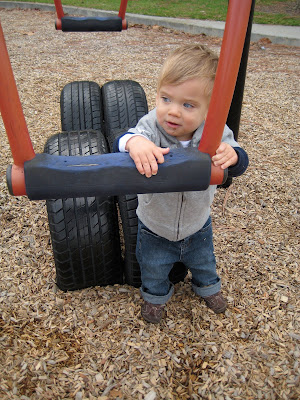 Brooklyn, on the other hands, loves to strike a pose. Speaking of hair, I am badly behind in taming her crazy wild hair as well. I look at other people's blogs sometimes with their children's well-manicured hair, and head-to-toe coordinating accessories (pip, nora, bethany!) and I think wow. I only wish I was that motivated to keep up that "polished" look. I realized a couple of days ago at a baptism that Brooklyn's hairdo was "yesterday's news" as my mom would say. Basically, the ragamuffins with the bed heads - they belong to me! I'll claim 'em! 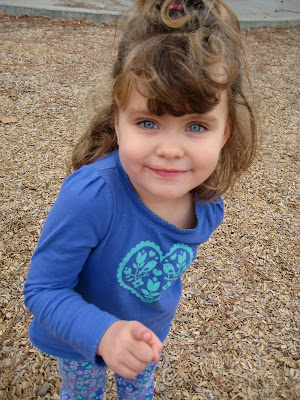 Later that day, we were privileged with a visit from Mark, Tracy, and family. The brothers/dads (Stephen and Mark) took the kids to another park while the moms chatted and made twice-baked potatoes for dinner. I even tried to make uncle Mark's "favorite salad" that I served him for the first time years ago, and forgot the secret and only spices at the end, salt, pepper, and sugar. Oops! Good times had by all! I guess we're even because when the guys/Mark made cookies, it took two batches to get it right. The first attempt ended up as a cookie-sheet full of oatmeal swimming in chocolate and butter blobs. The cookies from the second batch were well worth the wait, though!
Posted by Desirae Badger at 9:24 PM