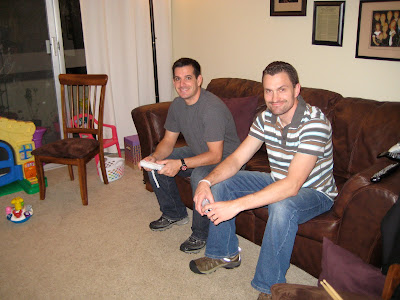 We had a fun time bringing in the new year with a couple of our friends, Jen and Derek. The Scattergories game was hillarious. I was a bit disappointed that I mistook "dessert" for "desert" on one of the rounds. I could have thought of a million desserts that begin with an "l", (anything loaded, right?) but couldn't think of a desert! Argh! 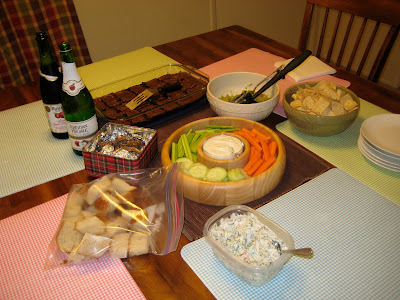 On the menu was an array of appetizers. Did I mention the party included us and ONE other couple? I thought for sure we'd have TONS of left-overs with all the food we prepared. There was stuff left over, but only about 1/4 cup of guacamole lived to see the new year, the shrimp ring was also history and thankfully none of the bruschetta had to be thrown away or refrigerated because it too was eaten. The bruschetta and shrimp ring are not in the picture for some reason. Also not pictured are the party planners, Desirae and Jen.
Posted by Desirae Badger at 10:39 PM