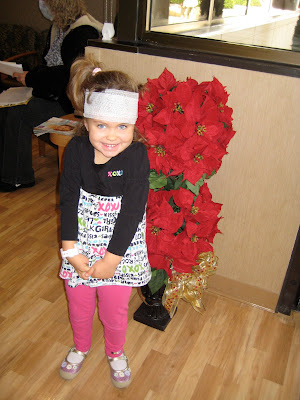 "Can you tell me what happened, Brooklyn?" the doctor asked.
"I was jumping on the bed and my mom grabbed my leg and flipped me and I hit my head."
Looking up at me, the doctor responds "That's the kind of thing we call Child Protective Services about." 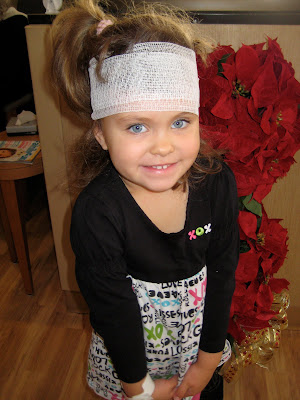 Of course I had to explain further, but I was pretty embarrassed that I was largely at fault for the injury. I didn't flip her, but I think Brooklyn was trying to say that I tripped her. So the real story was that I kept telling her to stop jumping on the bed and she ignored me. Then I held onto her leg to stop her from jumping. She was on the lower trundle bed that was pulled out from underneath. Anyway, when I held her foot, she leaned backward when she fell from the jump, and as she did so, she hit her head on the higher bed frame. It was the saddest thing I have yet experienced.
It was though it happened in slow motion, but of course, not slow enough that I had the presence of mind or the ability to prevent it. The gut-wrenching feeling that came after it was worse than dropping straight down on those rides at the fair. I felt vicariously her pain, but worse because it was mixed with guilt. 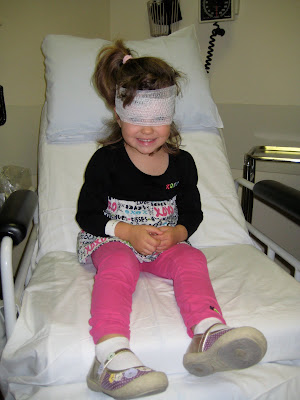 At the urgent care, we waited for ever! While we milled around the waiting area (or shall I say, while I tried to keep the kids still while watching ridiculously time-wasting t.v. shows such as Deal or No Deal and while the two kids ate all the dried cranberries out of the bag of trailmix that I brought) a nurse came out and put some numbing cream on the wound and blotted it with cotton or guaze, and then to keep the covering in place, they wrapped the gauze around her head. After a while, of course, the gauze became a mask or sunglasses. At least she didn't appear to be totally downtrodden. 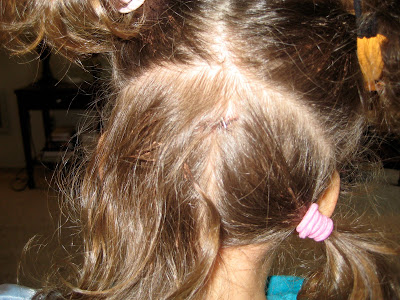 The end result was five staples. I tried to make them visible for this picture, but they don't show that well. She was brave and I was mortified. My advice to parents: NEVER do this. Two weeks and several pity treats later, she has a beautiful pink scar hidden under her wild hair. She usually is good about sharing food and treats with Ian, but the day she got the staples removed, I could hear her saying, "No, Ian. You don't get any treats because you were NOT brave at the doctor when she removed the staples." Even more hilarious was how she coolly reported to her Dad that it didn't hurt (the staple removal) even though she was hysterically kicking and screaming and thrashing about during the process. It took a lot of my own bravery to pin her down so the doctor could have a shot at them!
My cousin in Scottland was privileged to have her daughter suffer a similar head wound from an accident at the school playground. They closed the cut with super glue. I think they may have used the same thing here had the injury not been in the smack middle of her scalp. I really can't complain though, nothing was shaved. That was our silver lining.
Posted by Desirae Badger at 9:24 PM

The best thing about the glue was there was nothing to remove...and there was a big nasty scab where it was on her scalp! Yikes! I feel your pain though! I felt like I needed a sticker for being so brave!