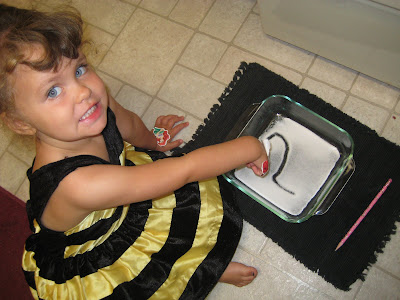 Thanks to some inspiration from Rachel Pierce and Ruth Grey, Brooklyn and I have begun to hold regular learning times during Ian's morning naps.  Brooklyn so looks forward to them and I am trying to stay consistent about doing them!  It really is fun to see how many creative approaches I can come up with to teach her the numbers.  We use preschool workbooks with stickers, an aqua doodle, a magna doodle, beans, and salt in a baking dish.  The only obstacle so far is getting her to write the numbers independently.  Once I thought I was being so clever and pulled a role-reversal on her.  I told her that she was the teacher and I was the student.  I asked her to show me how to write a two.  Long pause.  Then she finally decided to show me the number 2 from the counting chart in her workbook.  She traced the number two and said, "See, that's how we do it!"  I then asked her to draw one for me in the blank area.  Another pause.  Then she tried to convince me that we use "dots and lines." (She wanted me to make a two for her first out of dotted lines.)  She's a sneaky one! 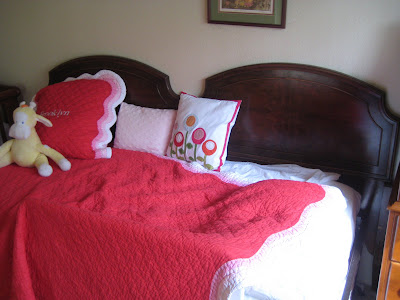 I also taught her how to make her bed.  Not too shabby for the first time effort! 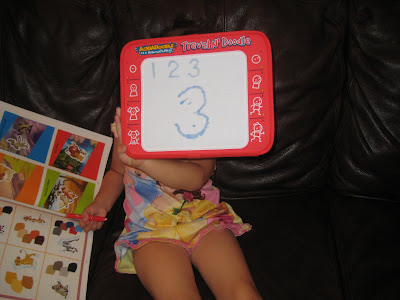 Other practical-life things she is learning include folding her jammies and putting them away, cleaning up her toys, feeding her fish, and helping put away her own dishes.  Today she even asked if she could change Ian's diaper...I told her maybe if there's a baby around when she's eight.  Her daddy thinks he'll let her try sooner than that.  Uh-oh!
Posted by Desirae Badger at 2:33 PM

That's our Brookie-Brook! She wins my heart with those u-bangies!

Oh fun! I guess I know who to go to for tips and ideas eventually :)

Good job Desi! She is a funny girl!
carolita-

please send your ideas my way. She is way too cute!

I feel so flattered to be mentioned in your blog :) Yay for Learning Times, I'm sure she's loving it! What a fun girl and fun mommy!