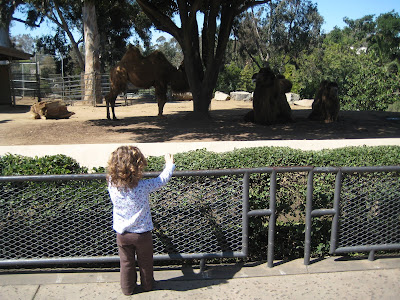 Stephen and I got zoo passes last summer, so I decided to use them again because Brooklyn is an animal lover, I have a double stroller that I need to get some use out of, and I could use the exercise (mostly the last one)!  (Speaking of working out, Brooklyn's got a cute booty!  I don't know where she gets it from!  Maybe it's just the stretch pants that make it look cute...)
First stop:  the camels. 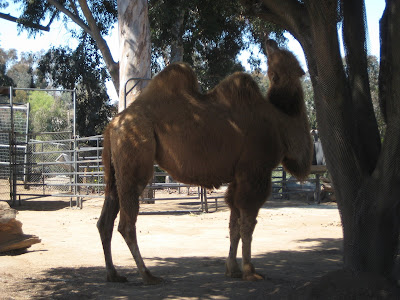 Next up: the bears.  They're the official animal of the state of California.  So cute! 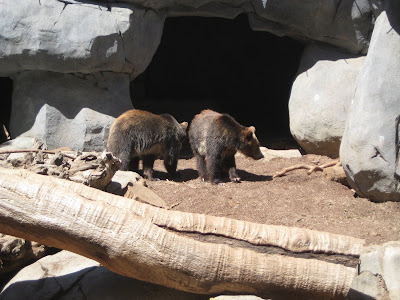 The giraffe.  I love how easy they are to see, those long necks come in handy strictly for public-viewing purposes! 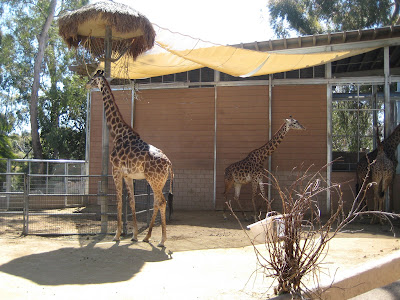 Last but not least, the armored-looking rhinos.  Did you know that the extra folds of skin increase the surface area and and provide built-in shade?  Me neither, until I read it in the Zoonooz magazine that comes in the mail as a benefit of our membership.  Their skin is also sensitive to insect bites and sunburn, so wallowing in the mud part of their healthy beauty regimen! 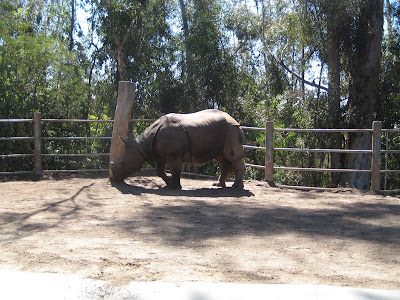 I would have taken more pictures if my camera's battery didn't die on me!  It was fun quizzing Brooklyn on the way out, trying to see how many of the animals we saw that she remembered.  Here are a few of the things we saw:  bears, birds, camels, cats, elephants, flamingos, giraffes, kangaroos/wallabies, koalas, lions, monkeys, pigs.  Next time we'll have to make it to the polar bears, giant pandas, gorillas, reptiles, tigers, zebras, and the children's zoo, which includes a "petting paddock".  We also learned overhearing one of the tour buses, that koalas sleep about 20 hours every day!  We also saw the cutest little family of monkeys.  The mom and dad were holding the baby because it wasn't strong enough to swing from the branches alone.  I definitely think we'll have to go back soon.  The Wild Animal Park, different location, same pass, has a cool butterfly exhibit next month that we'll have to check out.  Hopefully we'll get some cool pic's there!  After going there, I totally feel like watching Madagascar!  I love the part when one of the animals, the giraffe, I think, is convinced that they've been relocated to the San Diego zoo.
Posted by Desirae Badger at 4:13 PM

My DON Sharon has a daughter who is interning at the Zoo. Sounds like you had a great educational experience. BADGER DAD

By DON he means Director of Nursing. Personally, I remember spending 2 weeks with my grandparents in LA when I was nine and the Zoo was one of the highlights of my trip. I bought a small stuffed owl there (Witty, from a Walt Disney movie. I wonder if my parents still have the slides my grandfather took of that trip? Evelyn/Mom/Grammi