3 Cheers for the 3 Mouseketeers!

"I'm Free!" She'll tell you when asked her age. 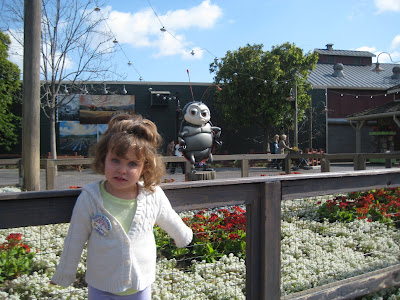 I admit I'm not a huge amusement park fan, but when my mom said she wanted to take Brooklyn to Disneyland on Brooklyn's 3rd birthday, how could I possibly say no?  Then when we thought about it more, if I was going to drive Brooklyn an hour or more to Anaheim, I might as well get into the park too.  So, if I'm buying myself a ticket, wouldn't it be worth it to spend the extra $50 or so to get a season pass?  This is is why Disney is still in business my friends.  Did I mention that a ticket is magically free on your birthday?  Our story doesn't end here... Stephen called me up the morning of the trip and says "I think I'm going to take the day off."
To which I replied, "Don't you have stuff to do today, though?"
To which he replied, "Nothing I can't miss."
Fast forward to 11:15 A.M. we are parked in section 5 of Donald Duck and riding the tram to "the happiest place on earth."  So much for a low-budget birthday and a "free admission" on your birthday. (Did I mention that since she's now three, she's no longer free on every other day, so Brooklyn got a pass too. 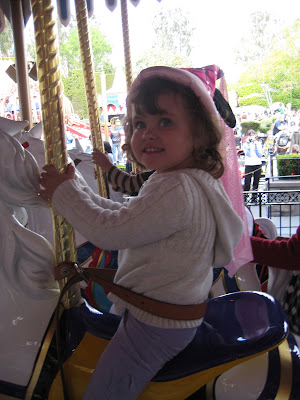 She better be smiling!  (I know, I'm totally frugal and still slightly unconvinced that this was the right course of action.) In case you are wondering, STEPHEN insisted on buying the princess hat with mouse ears!  Secretly I think he may have been equally excited about this adventure with Brooklyn.  I wanted to surprise her, and he kept wanting to spill the beans.  I knew he was excited when he was getting all anxious in the parking structure with comments like, "Hurry up people! What's taking so long? The attendants are all escorting us to a row of spaces that we just pull in, one after another." 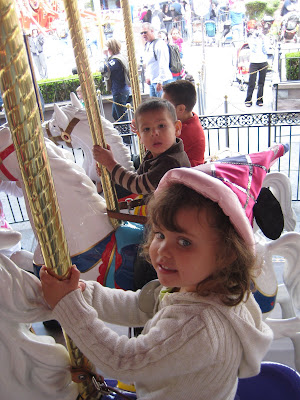 Caden, Caleb, Calvin, and Carol all have passes too.  They met us there along with my mom.  Calvin worked, however.  Good job, Calvin!  I'm glad someone takes his job seriously!  Just kidding!
So the longest line we waited in was that of the Disney Princess Photo shoot.  I should post some pictures of Brooklyn in line and compare them with her subdude look in these ones.  I know she was convinced they were all the REAL DEAL.  (She also posed with Mulan and Snow White.) 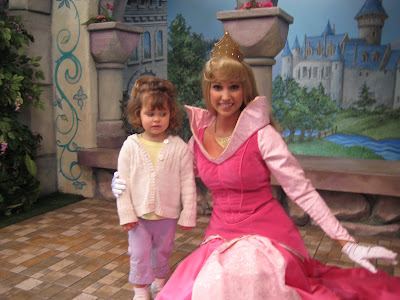 All-in-all, we had a good time.  I think the best part was the bugs life section of California Adventure because the lines were short, and the rides were the perfect entertainment level for the pre-K audience that we had. 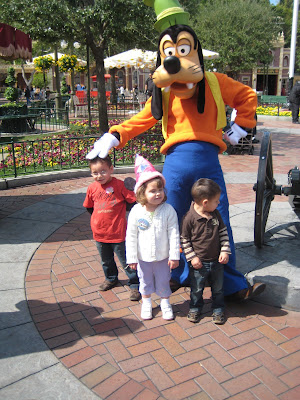 Here's the goof troop with their fearless leader.
I was just glad the park had a "baby station" at the end of Main Street where moms could nurse their babies and change diapers away from the regular public bathrooms and various attractions.  I also scored a cute pin at this place for Ian that says "First Visit."
Disneyland,  we'll be back!
Posted by Desirae Badger at 3:50 PM

Oh my word. I don't dare show Miriam this post, she would die of jealousy. So cute! Happy Birthday to you!

So cute!! What a great place to celebrate birthdays. You need to help me talk scott into getting me a pass so we can go up together!

I wish I had been there. DAD BADGER

I LOVE Brooklyn's face in the picture of her and Sleeping Beauty. Total awe! What fun updates!