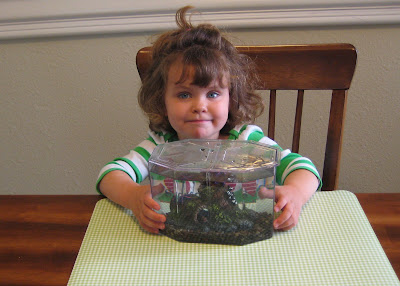 Our BIG b-day gift for Brooklyn this year was supposed to be a fish, but because we got all caught up Disneylanding and house-sitting last week, the big birthday gift was postponed.  The fish finally made it home (from Stephen's work, where it has been living previously, with one of his co-workers) a week after her Brooklyn's big day.  We are actually the adoptive family because if there was a humane society for fish, it just might have ended up there.  Probably not, it was very well taken care of, but the owner was just done with it, I guess!  That's where we come into the picture...
It was probably better that we spread out the birthday fun, because this little beta fish has been a HUGE hit in our home.  I think Brooklyn is the happiest first time-pet owner I've ever seen!  Just look at that face! 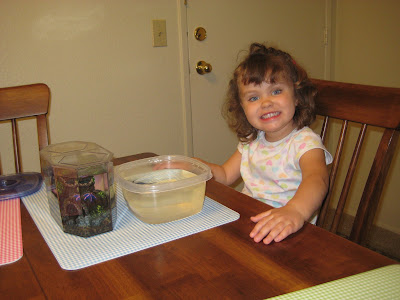 Notice in the picture how there are 2 containers.  That's because Stephen decided to clean out the fish's home and transport the fish to our house in a less crowded container.  The fish bowl has some cool scenery stuff and a "hollow log", etc.  After scrubbing down the tank, Stephen decides to spoon out the fish to replace it in its home.  I was pretty nervous about this.  I had to leave the room and hold my breath. My fears were not assuaged by the things I heard next.  "Uh-oh! Dang it!  He went down the drain!"  No! No! No!  Worst case scenario!  Get her all jazzed about the fish and kill it before we even enjoy it!  Then, "Wait! He made it!  Come here, Oh... Oh!"
Me from the other room, "What's going on in there?!"
No response.
Long pause.
"Got it!"
Huge sighs of relief.  The fish litterally flipped out of the bowl, the spoon, and into the kitchen sink.  It disappeared.  There was another bowl in the sink, a big silver mixing bowl from dinner that was dirty but soaking up some dishwater.  I think this was partially covering the drain.  Needless to say, the fish disappeared, but finally was caught by Stephen who then RINSED him off in RUNNING tap water!  Wow.  What a trip!  Stephen and I both just stared at each other, our eyes huge with amazement.  We sounded like a broken record, I'm sure, "I can't believe he made it!"
Rewind.  Stephen,"Brooklyn, what should we name our new fish?"
Hesitation... We knew this name choice would be very telling.  I thought Brooklyn would choose the name of a favorite friend or cousin.  We were both surprised by her response.
"Cookie."
Now I'm wondering if she just happened to notice some of these on the counter and was distractedly asking for one, but at any rate, the name stuck.
After some discussion later, we believe the name may have come from the similarity between the eyes of the fish and the eyes of Sesame Street's Cookie Monster.  Both are big bug-eyed creatures, but then again, so is Ian.
Here are some of the observations Brooklyn made about Cookie the first few minutes after he first settled (safely - whew!) into his cleaned home:
"Fish don't talk"
"Is that his bed?"
"Move around, Cookie!"
"He's smelling around."
"He stopped moving!"
"He's too vizzy..." (translation, vizzy= tired, like when I'm too busy to help Brooklyn, she translates that to me being tired.)
"I'm not happy about this!" (After being put into time-out on the stairs when she disobeyed us by feeding Cookie)
Besides a fun pet, Cookie makes a great catch for discipline tactics!  All we have to do is threaten to take the fish out of Brooklyn's room for her to immediately turn off the water works at bedtime or naptime!  Brooklyn likes to think that she and Ian and Cookie all sleep together in the same room.  Sometimes we bring Cookie (and the bowl) onto the kitchen table to hang out with us during the day while Ian is napping.
One thing for sure, so far this fish has been one tough Cookie!
Posted by Desirae Badger at 3:11 PM

Desirae, Brooklyn is so adorable. I love hearing about her escapades!

A great fish and child story. Keep it up. BADGER DAD

Those Cookie adventures were awesome! We look forward to some more. Makes me want to get a fish for the girls... almost. :)