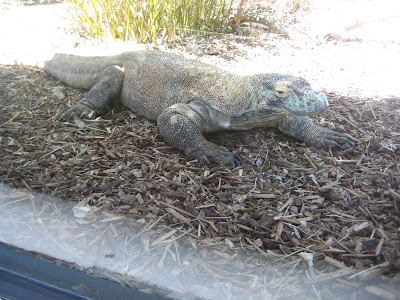 I never knew that there was this little nook at the zoo that I haven't seen yet. It's been around forever, and I was really impressed by the awesome reptiles that we saw there. First of, the Komodo Dragon - super cool! I don't think I've ever seen a 4-legged reptile this big before. I've only heard of them/seen them before on a coloring page, but who knew that there'd be such a random and awesome creature at OUR zoo? After seeing this at the zoo, we found a library book entitled Komodo! by Peter Sis that Brooklyn is loving thanks to this live encounter. The book also has some interesting facts, which of COURSE I will share with you all because I know you're dying to hear them! (Wink,wink! Skip ahead if you're bored already.)
Komodo Monitors/ "Dragons"...
1. Are giant monitor lizards with bodies that can be up to 9 feet long and weigh 300 pounds.
2. Are the sole survivor s of the carnivorous dinosaurs that thrived in tropical Asia 130 million years ago. They are considered to e the last of their kind inhabiting the world today. They are extinct everywhere except on the island of Komodo (in Indonesia)
3. Can go up to 1 1/2 months without water.
4. Can kill water buffalo 15 times their weight. They often strike their prey with their tails.
5. Unlike other reptiles, their body temperature remains uniform day and night.
6. Have a lifespan of about 50 years.
7. Shed their skin in February.
8. Can maneuver in so many ways! They are swift runners. They also swim, dive, dig, walk on two feet (now this I'd love to see!) and climb.

Another fun find: The Galapagos Turtles. From the Zoonooz magazines, I've read that several decades ago, children were allowed to actually pose for pictures on the shells of the real turtles here at the zoo. Now they only have some bronze statues for more animal-friendly photo ops. Brooklyn shares her shades with one such below. 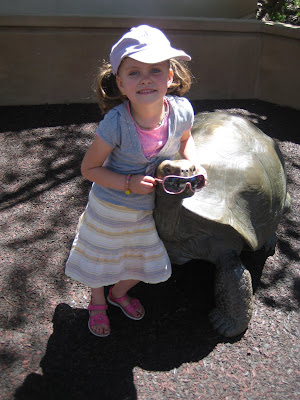 Don't these kids look so innocent and loving? You'd never guess that we rushed out of the house that morning to divert any continued contention between the two of them. 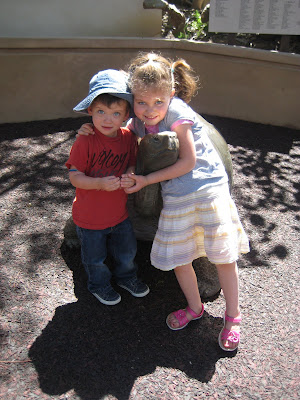 Apparently, the different shells identify the islands from which each of the turtles came. 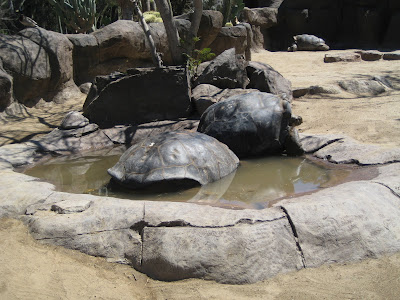 Speaking of larger than life animals, these turtles are huge too! Their shells can measure up to 6 feet long and 4 feet wide, and the whole animal can weigh 600 pounds. Beyond that, they can live up to 150 years. Some of the fellas here are already over 100 years old! They are the top herbivore on the volcanic islands where they live and they don't have much competition for food! 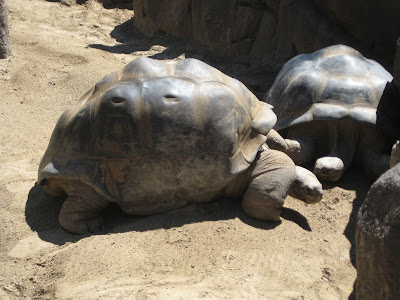 Amazing that something so OLD and slow moving can be such a "top dawg" in his neck of the woods! 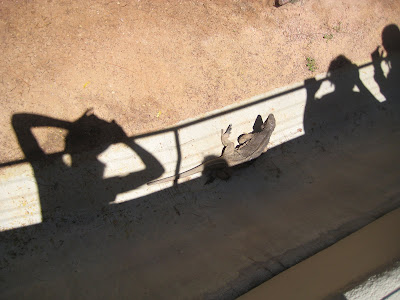 We also checked out some other lizards and geckos. Of course it was exactly noon, so the sun was blazing overhead and consequently, the shadows were sharp and telling. Here's one, it's called "Desi looks like a total tourist." 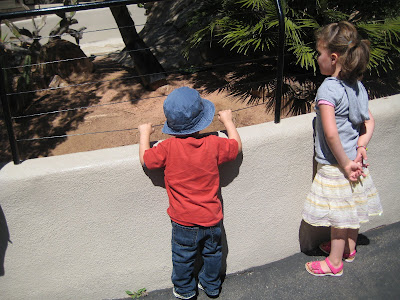 The kids didn't mind the heat though, they were mesmerized by even the seemingly every-day desert-dwelling reptiles. You've gotta feel for us though, we're "suffering" at anything above 80 degrees here. 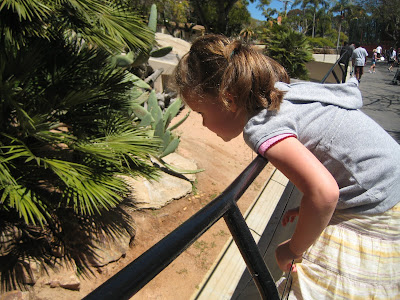 Oh, so I did include that picture of the Galapagos Turtle sign! It's basically my source for the facts listed a few photos back. 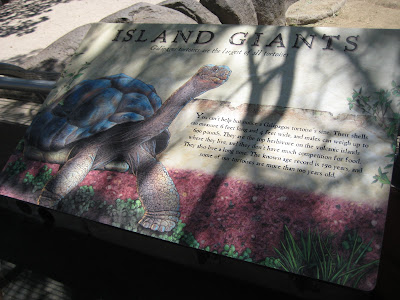 There was also another indoor hall of more reptiles. I love the Holly Hobby (is that what the 80's doll with the bonnet, or am I confusing it with the craft store in Louisiana?) look that Ian is sporting here. 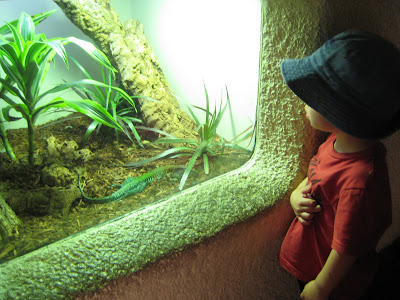 Aaaah! The zoo. We call it our classroom away from home!
Posted by Desirae Badger at 3:55 PM