Late Friday night, we arrived here. It was dark, so we didn't see the outside much (this is the back side of it, which faced the lake). All I could think was how much work it would take to return it to its original immaculate condition after our families had occupied it for a few days. 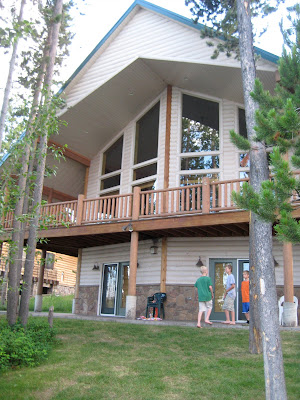 Wow! It was so nice inside! The kitchen was so nice and big and stocked with nicer cookware than I've ever owned. When I thought cabin (before our arrival) I thought we'd be close to camping, maybe a step or two up from tenting. Boy was I ever wrong.
On Saturday morning, we checked out the lake via the dock in the backyard. The kids were just dying to get in. Swimmers or not! 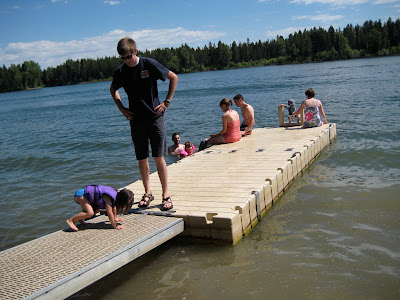 The water temperature was much like our ocean here, c-c-c-COLD! 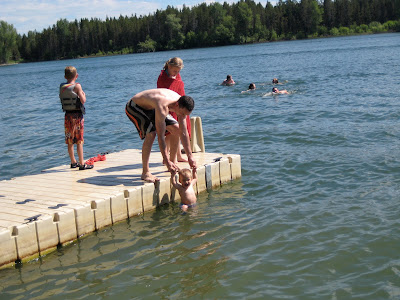 Did that stop us? 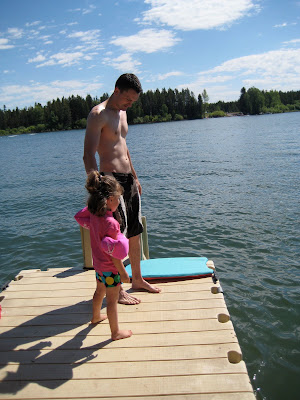 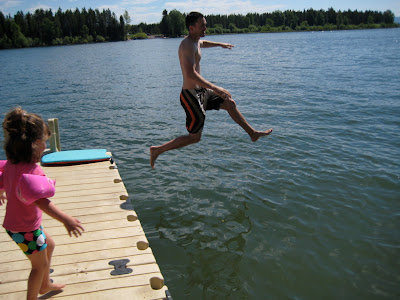 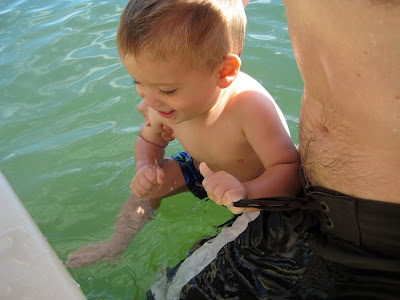 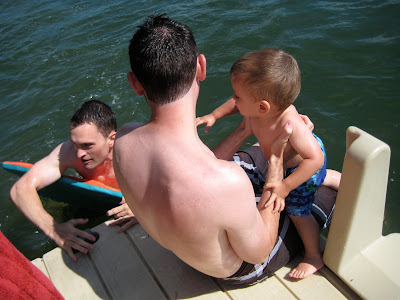 Someone was "man" enough to wear purple. Stephen's jacket a few days later was even brighter! 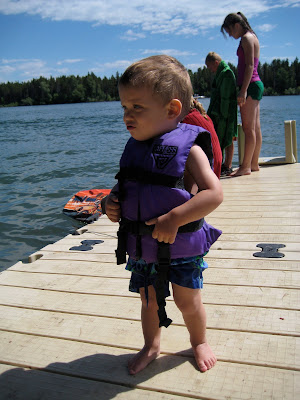 A common sight was the adults dangling their feet off the dock while twisting their torsos to prevent small children from entering the water un-jacketed. 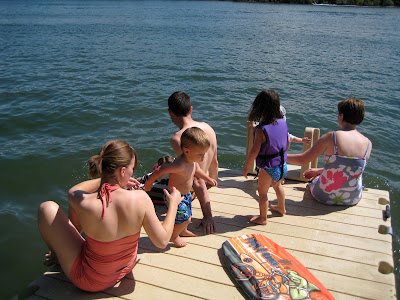 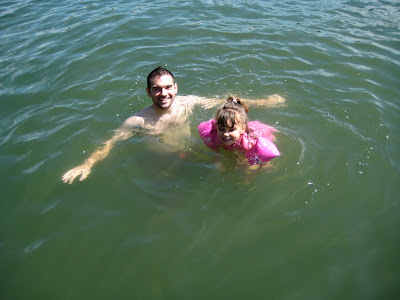 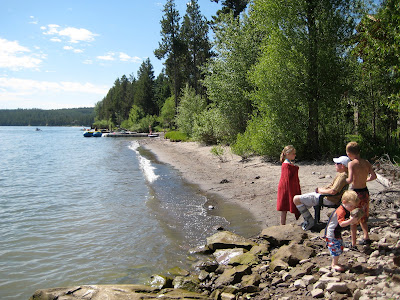 Trevin and some of his crew. Cooper throwing big rocks because he's just that tough. 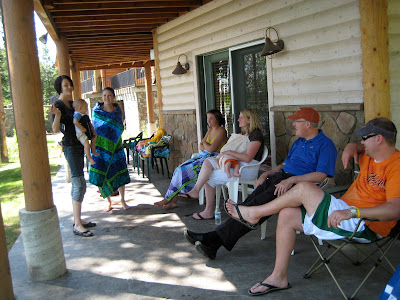 Family chatting, feeding, drying, listening, and lounging on the back patio. 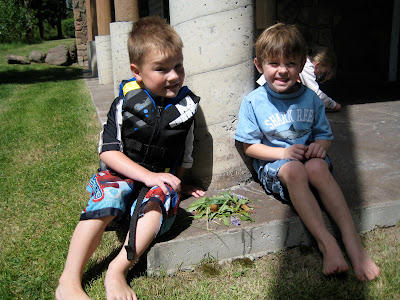 Partners in crime, McKay and Bridger. Oh, and this was the creative ant house they constructed. 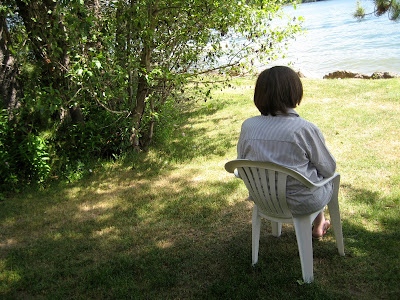 Pausing for moment from the latest fantasy book, our lovely matron. 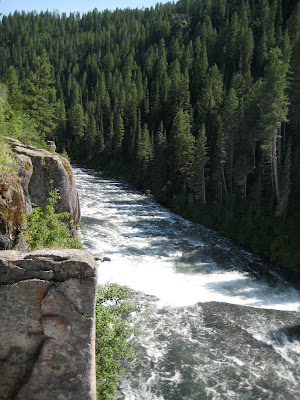 This was the scenic walk we took alongside Mesa Falls Sunday(?) afternoon. Thanks, Rich, for your "on-demand" tour-guiding services. 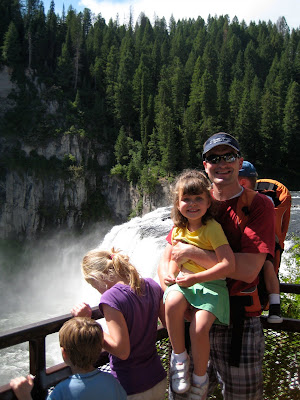 A little old cabin with a store and some fine furry friends. 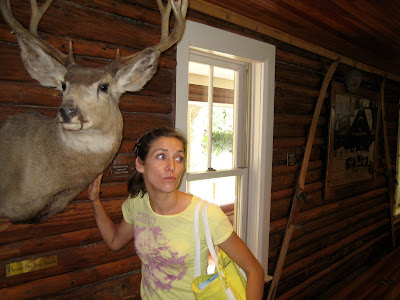 For some reason, we couldn't find Gaston anywhere, so we stole his glory. 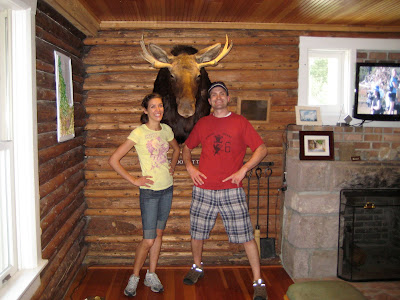 Brooklyn's educational coloring book which she is NOT allowed to use yet (until I make several copies of the pretty coloring pages so she doesn't destroy them). 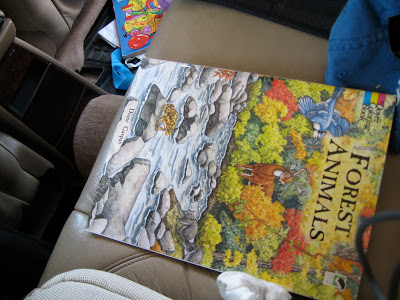 The movie theatre downstairs. I love how my children made themselves so at home. 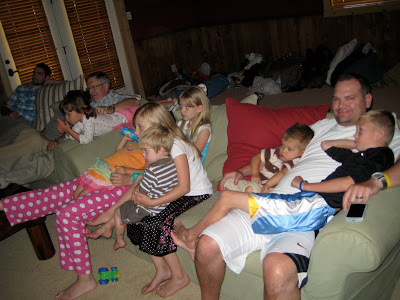 Ian loved the great outdoors. One day on our journey I found a few sticks and rocks on the mat below his carseat. I then realized that whenever he ventured outside, he never returned empty-handed. 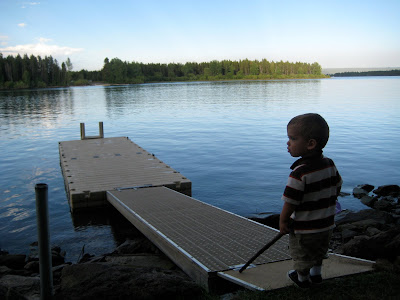 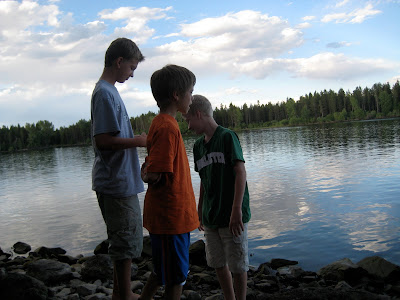 A few moments of male-bonding 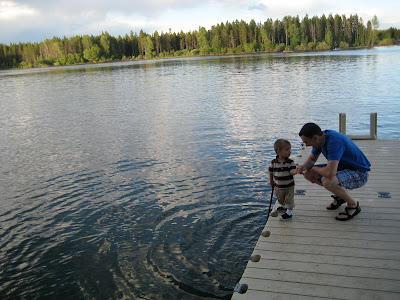 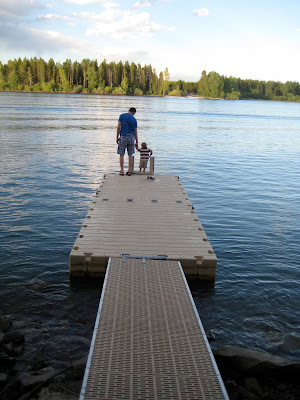 Posted by Desirae Badger at 1:39 PM

Awesome! I've been waiting patiently for someone to blog about this trip. I'm super bummed we couldn't make it. Hopefully, I can visit San Diego for an interview this winter! Keep your fingers crossed.

Love all the pictures!! It was a great trip, I loved it all and It was great to visit with you!

those are stephen's ties...mine are orange :P

Thanks for the great pictures. We will add our's soon.

Yes. Stephen pointed that out to me, Eric. Oopsie! How embarassing that I can't i.d. my own hubby's belly button!