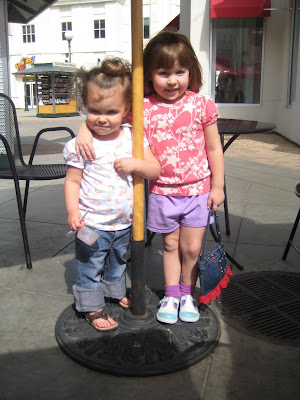 Fact: Every girl has a pair of skinny jeans.
In Brooklyn's case we're just happy to have found a pair that fit without digging into her belly when she sits down or bends over.
History: For the past year, we have not successfully dressed our child in jeans because we haven't found any jeans with elastic all the way around the waist which will accommodate her "curves." We usually just stick to the good ol' stretchy knit ones with plenty of "give." Maybe I'm wrong, but she may have had a small growth spurt lately, in which she has gotten a little "leaner". She still has a big belly, but I think it is safe to dress her in these jeans once in a while without causing serious damage. Notice the huge, rolled-up cuffs due to the large size!
Above is a picture of her with her friend Madison. We went to get some Cold Stone ice cream to celebrate Madison's mom's birthday. I was totally prepared with healthy treats for Brooklyn, hoping to divert her from devouring all of my own serving, and to prevent a sugar high that would mess up her ability to fall asleep easily at night. 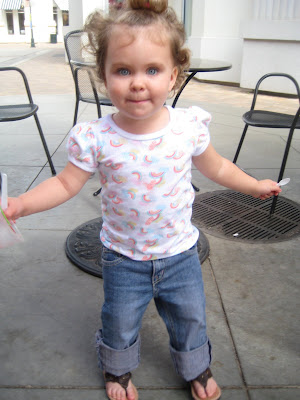 What's that saying about the best laid plans? . . . She still stole a couple bites right away, using the sample spoon that I gave her. After that, she did share a yogurt with me and she downed the strawberry applesauce in seconds flat. Note the empty applesauce cup and two used spoons, in the pictures. The irony of the whole situation is that that one small "like it" size of ice cream sent ME into a funk. It totally felt yucky and gross, and am so turned off from going there again anytime soon. Not that anything was really wrong with the way it was made, but it was just too much sugar and spice and everything nice. I even thought I was being "good" by getting the strawberry (healthy fruit, right?) cheesecake kind instead of the chocolate and caramel "Founder's Favorite" that I usually go with.
Moral of the story: We parents should try to give ourselves the same limitations that we impose on our kids.
Another funny thing from that outing: Madison came up to her mom and asked in complete confusion, "Mom, she keeps saying 'A-fan'"
Her mom's response, "yeah, that's how she says your name." This is true. Basically, Brooklyn loves playing with Madison, who is about four years old. Brooklyn will chase her or shadow her every step repeating, "A-fan, A-fan!" I think we need to get out more! Playing with other kids is so novel and entertaining, but it may be a little overwhelming for the innocent by-standing child.
Another example of Brooklyn's "developing" social behaviors can be seen, of all times, after church! She seems to believe that this is the time to run around the halls chasing other small children, such as Madison. She will squeal at the top of her lungs, laugh and run, run, run. We are talking LAPS around the church! This is a record cardio-work-out for the same child who will NOT walk the whole way across the apt. complex to get the mail. I am so bad because today I basically allowed this inappropriate behavior and was inwardly laughing about it. Bad, bad, inexperienced parent, I KNOW! My completely unjustified reasoning? What a great way to get her moving fast and for a long time! After scarfing down all the Kix, raisins, and left-over, stale fish crackers from the chapel floor and diaper bag pockets, then all the Cheeze Nips from the Nursery snack time, AND the one and a half adult-sized servings of breakfast, she really needs to work this stuff off! But, as a member of the Primary Presidency (Assistant Secretary, to be exact,) I also know it is SO irreverent! I've got to come to grips with this! Did I mention she also goes to a "toddler fun" class at the gym, which is NOT as successful at getting her to move as this post-nursery free-for-all hallway chase? Heaven help me! Or you could too - I love advice from readers! :)
Posted by Desirae Badger at 6:46 PM

Babe,
The proof is in the pudding!
I'll have to wait until I see the little rascal in person. Going by your past history, your thoughts that your daughter is "thinning out" are usually not accurate. But that's why we love her, her gut is Irresistible!
24 days left...til I can verify!

OK, I don't have any personal advice about the running in church, but my friend tried something that worked with her kid. Everytime her daughter went all toddler crazy, she picked her up and took her into one of the rooms and sat in a chair and held her daughter on her lap (BORING). After about 2 months or so of this, her daughter finally got the point and started being really reverant in sacrament meeting because she didn't want to sit in the room with mommy with nothing to do. Today she is the MOST well behaved 5 year old I have ever met. Don't know if it will work, but I may try it when Kelsi starts to try to make me run laps - by the way, we live in good 'ol Eastern Washington, but Idaho isn't that far away. :)

No advice here, but that was a very funny post! Love the skinny jeans.