Sunset on Half Dome from Glacier Point 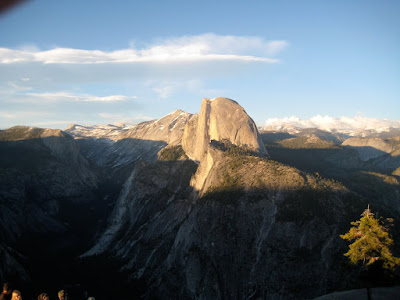 I know there are a lot of you who can only stand SO MANY pictures of the same view, so if that’s you, skip this post. It is the sun setting on Half Dome from Glacier Point. Each picture shows the shadows growing larger and the visible, sun-kissed part of Half Dome shrinking down to nothing. I am very sorry, but at least now you’ve been warned! 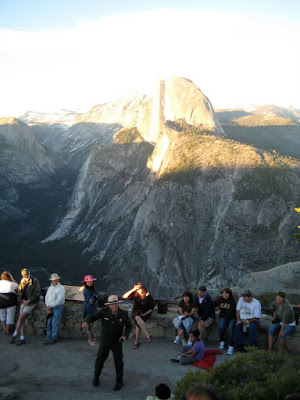 We stuck around for the Ranger Talk at 7:45 PM. It was well worth it. It was then that we laughed at his animated humor and learned quite a few things about the history of Yosemite. I love how Ranger Dave started off his speech with the top 10 dumbest questions he's been asked by tourists there at Yosemite. Some examples: How long is the four mile trail? and "I've looked all over this map and I can't find Old Faithful anywhere!" Another one, "I'm thinking about hiking Half Dome later this afternoon." (The Half Dome hike is an all-day affair, lasting 10 - 12 hours on average.) 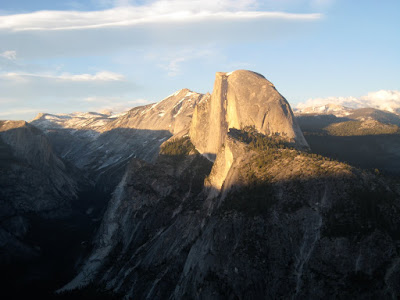 One thing that was interesting was that tourists used to come visit Yosemite to watch the very popular firefall started by John Muir. Another cool thing we discovered is that Half Dome, John Muir, and Yosemite Valley are pictured on the back of the California quarter. We also learned that buffalo soldiers were some of the first park rangers here at Yosemite. 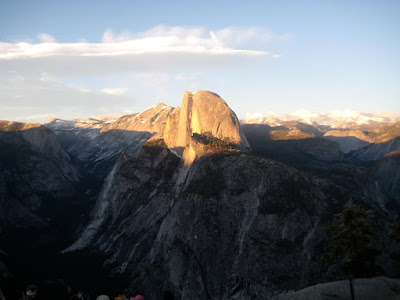 We also chatted with a few other people who sat near us on our comfortable rock that we claimed upon arrival. It was a mom, a daughter, and the daughter's boyfriend. The whole time we talked with them, I wondered about the goofy-looking visor that the mom was wearing which read, "Love your dentist," or something like that. I finally got up the courage to ask her about it, figuring her husband was a dentist. To my surprise, she said, "I'm the dentist!" 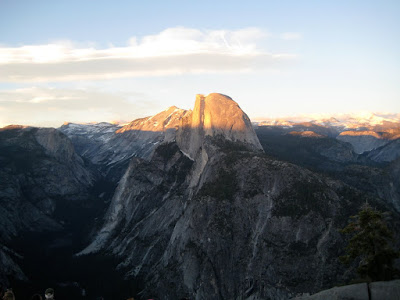 I don't know why, but it completely took me by surprise. That was just about the last response I expected out of her. She just looked like another regular tourist. There were lots of people who we chatted with there that I wondered about their "real/normal life" because at the park, I felt like we were all on equal grounds as campers, hikers, and observers/tourists. 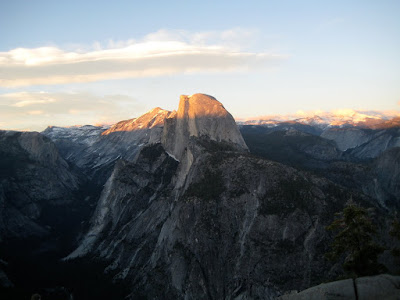 Amazingly, maybe as much as half of the people at that ranger talk were visiting from another country. 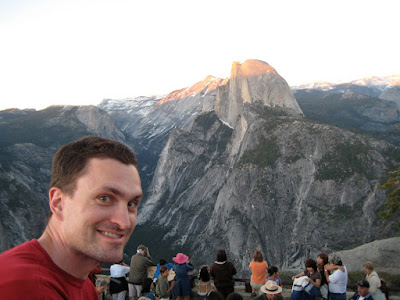 Thank goodness we had driven up here and didn't have to walk home in the dark... 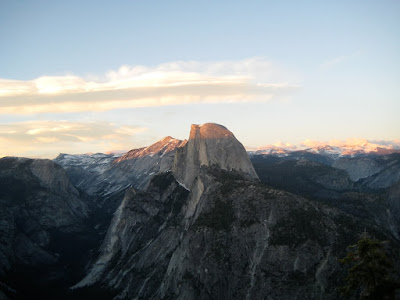 Many a dark, winding roads later, we actually found our campsite .... and those lovely headlamps that Stephen always brings to camp. Mine gave me a headache though because I'm pretty sure the last person to wear it was Ian and I didn't think it necessary to adjust it.... wrong. 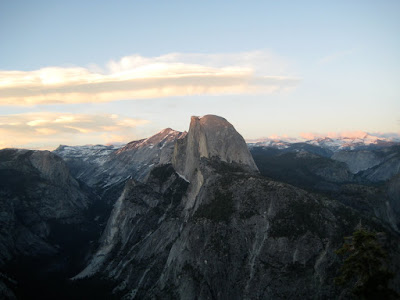 So, up went the tent, and out of the car came the food. Then the food, toiletries, and all things scented were tucked safely away into the metal, locking bear-box provided at each campsite.... and out of the tent-doubling VW bug came some neighbors wanting to share our bear box because they actually didn't really have a campsite of their own reserved. They were sort of illegally parking there overnight and didn't want to get their car ripped open by hungry bears I guess. 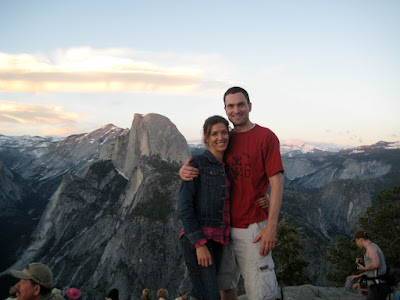 We FINALLY ate a "real" dinner around 11PM. Thank you, Saiko for warning us that real food would be slim pickin's around here, and super expensive at that. So, a couple cups of boiling water plus a bag of dehydrated mountain man meal plus nine minutes of those two things combined in the thick metal bag, sealed, equaled our dinner. WHAMO! Beef stroganoff, coming right up!
Posted by Desirae Badger at 10:13 PM