Finally, Something is Right in This World!

The title to this post was my friend's response to something I learned at this museum. Read on to find out what little-known factoid made her day and mine. 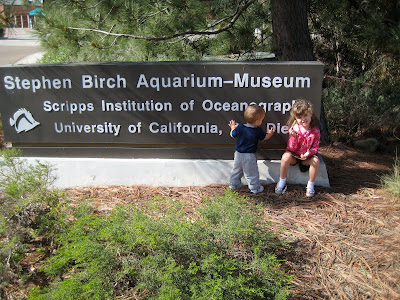 I have always wanted to visit the Birch Aquarium. This Friday, the kids and I finally did and I was not disappointed.
I had to crack up at Ian's expressive grunts as we viewed various large creatures. The first one was just outside the entrance. For the longest time, Ian was stopped in his tracks. It took him a few minutes to cross that line in the sidewalk... you're about to see why. 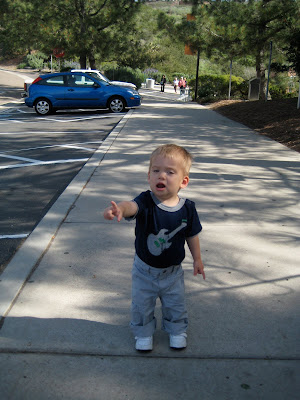 Finally he did it. His sister had already circled the enormous statue and pond, and so Ian decided it might be safe for him to join her. 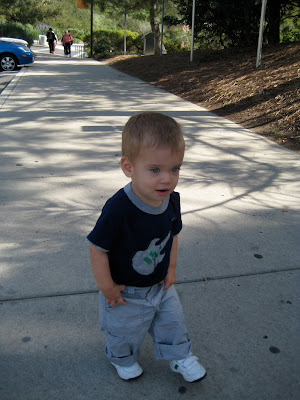 "Here I come! Wait up!" (This is a direct translation from Ianese.) 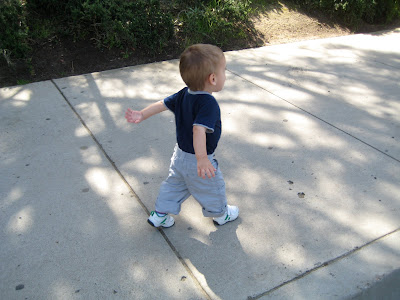 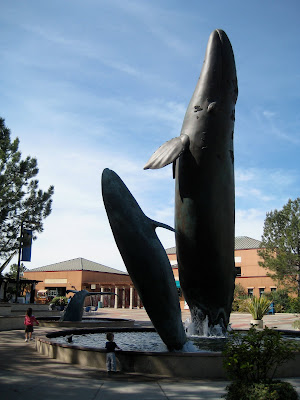 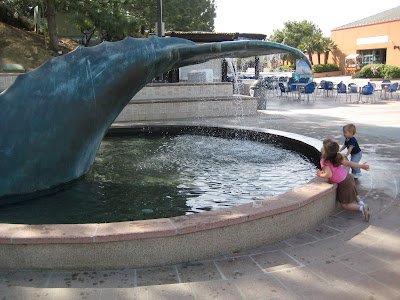 I am so disappointed that we've latched onto the Disney culture. I won't say who's to blame for joining the Disney movie club in our family, but most of you could probably guess it wasn't me. At any rate, everything at this museum was either Nemo-related or not. We were not the only visitors have these type of Nemo-comparison discussions. 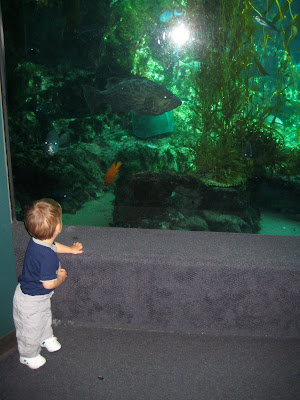 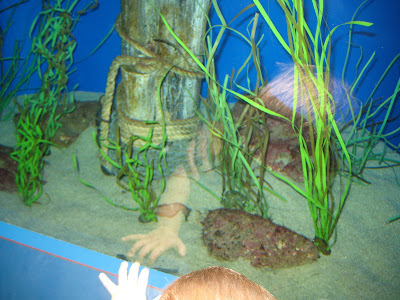 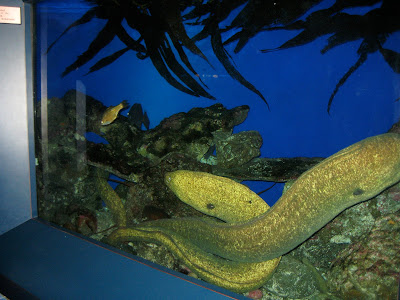 I think eels are just about the ugliest creatures ever! 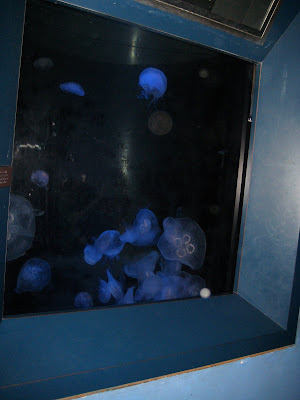 The different varieties of jellyfish were pretty fascinating. 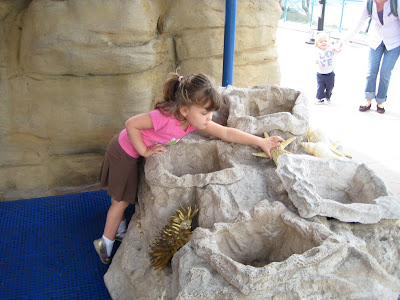 I have decided that one of my children is much more adventurous and brave than the other. You'll probably never guess which is which. 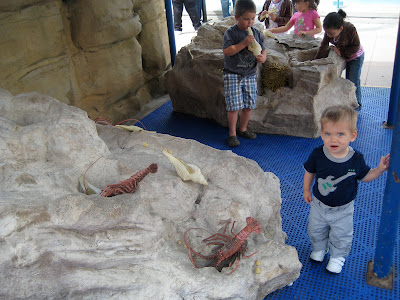 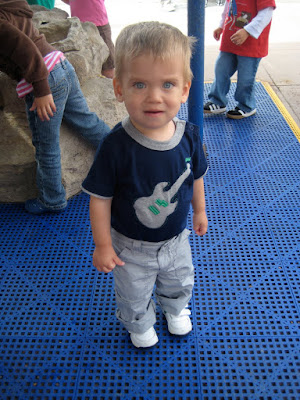 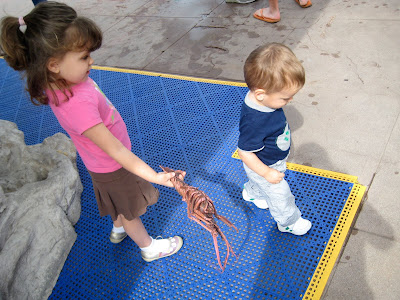 I couldn't resist capturing the view from behind! 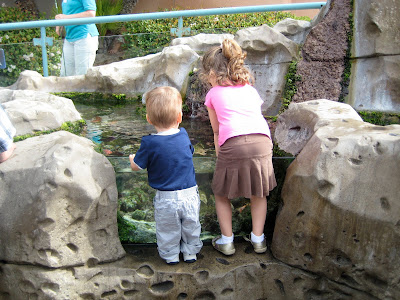 Here's the beach down below. There were those pay-per-view binoculars that stood right at the edge of the cliff. Of course, I was totally ridiculously cheap and didn't even check my wallet to see if we had the 51 cent fee. I probably figured we go to that beach all the time, why do we need to see it from binoculars? Okay, maybe we could've seen a grey whale migrating. Oh well. 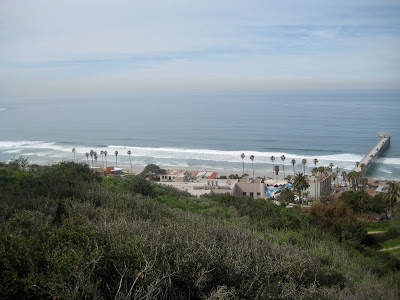 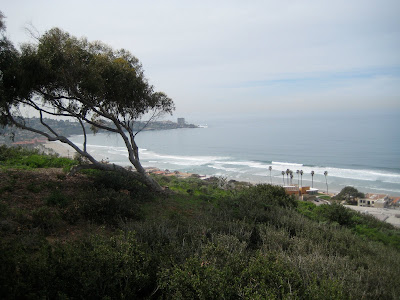 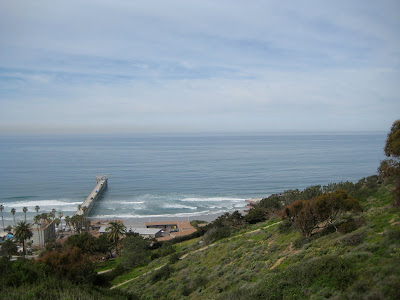 This has got to be luckiest species on earth! Why? The MALES carry and birth the babies! Is this not a dream come true? Brooklyn and I agree that this was our favorite part of the whole visit! I couldn't believe my eyes when I read that the male seahorse spends most of his life pregnant! Seahorses usually have a single partner for life. 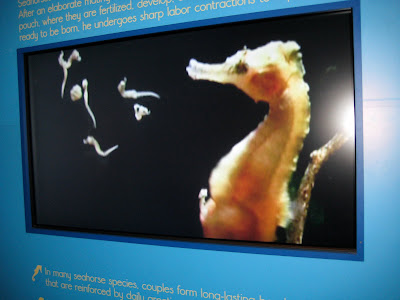 The lucky ladies actually give their eggs to the males who then fertilize and hatch them 2 - 4 weeks later. There must be a 100 or so babies that are expelled at a time. A dozen or so fly out with each sharp contraction. Sadly, very few babies survive to adulthood. 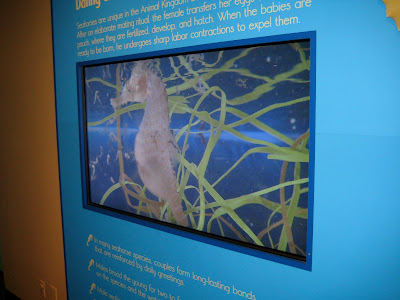 Alright, it was worth the 10 bucks just to learn that fact. Now that you've heard it from me, you can thank me for saving you the trip!
Posted by Desirae Badger at 7:50 PM