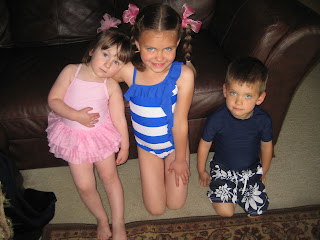 For Brooklyn's birthday this year, my sister and her two girls and my mom came down to party it up with us.  At school, of course we had to bring cupcakes and muffins. (Anyone looking for an excuse to use pumpkin and chocolate together?)
Then when dad came home, the first order of business was SWIMMING!  Stephen is so great about that.  He takes the kids out to swim as often as possible after work.  They love it and so do I!  It's my alone time (plus Jack) for fixing/finishing dinner. 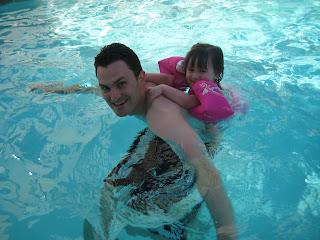 Next we cleaned up and went to the Corvette Diner.  It was a fun 50's-themed restaurant with lots of action!  There was a game room where the kids played with Stephen while we waited to be seated.  They had a few arcade-type games along with old-school stuff like skeeball, a timed basketball shooting game, etc. and those little photo-booths.  There was also lots of 50's music played by a live D.J. and also some crowd-pleasing singing and dancing by the waiters and waitresses.  When it was time to order, the kids had a long list of milk shakes and malts to choose from.  They did not pass up that opportunity to sugar-out while waiting for the rest of the meal! 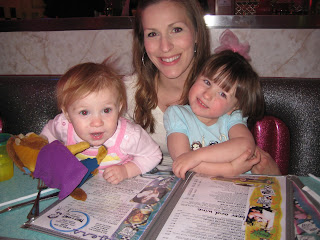 Here's my sister Pip with her two flower girls, Daisy and Lilly.  Daisy did a little table-top action for us! 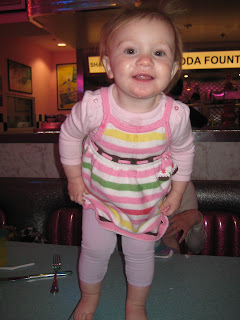 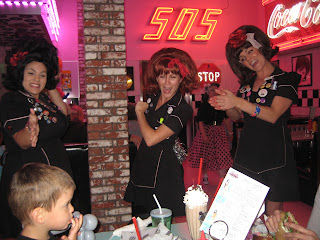 The waitresses all had puffy hair that was just too hilarious.  Here they are singing the hot dog song to Ian.  This was a special  bonus that came with his order.  He didn't quite know what to do with all the attention. 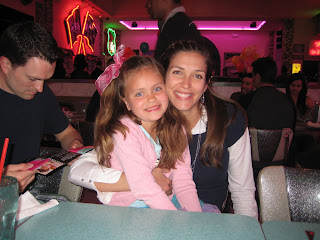 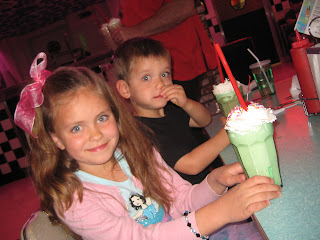 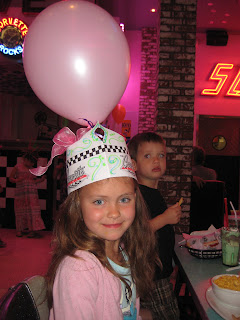 We had a rockin' good time.  Thanks for joining us Mom and Pip!
Posted by Desirae Badger at 3:01 PM

Her hair is so long! What a fun evening!