Back to school means back to good ol' learning times! 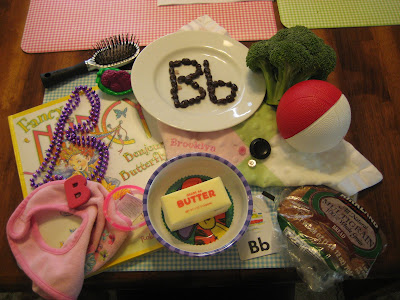 Instead of learning letters in the order of the alphabet, I decided to first focus on the letters in Brooklyn's name. They should interest her more because of the relevance (not that she has lacked interest in any letters anyway) and my goal is to get her to write her name independently soon. Currently she can only write the two "o's" and the "l" (She can spell it as a chant that I made up already.)
So "B" was first. We made a collage of all the things we could fine around the house that began with that letter. Triple points for the book because it's title is Bonjour Butterfly! The two "b's" on the plate are made with black beans. I think she's really picking it up because she now points out letters in signs just like she has been doing with numbers. (She especially seems to notice the numbers on speed limit signs.) As we walk through the mall, she points to letters on signs, it's like a whole new world has opened up to her, now that these symbols are part of a standard code. It's pretty cool. I remember how jazzed I was when I learned to read and all the things on signs finally made sense to me.
Posted by Desirae Badger at 3:36 PM

After Alyssa learned her letters, it took FOREVER to get to the car. She had to stop at every car in the parking lot and read the license plate!

That's funny! Isn't it exciting when they catch on? I know Brooklyn knows all of her letters already, but we're focusing on the sounds they make, pointing out words that have that beginning sound, and trying to get her to write them and differentiate between upper and lower case. It's a tall order, but it's kind of fun to be the first live person (obviously, besides Sesame Street, etc.) to officially introduce them to her.

What a great idea. Thanks for sharing.