He digs the beach. 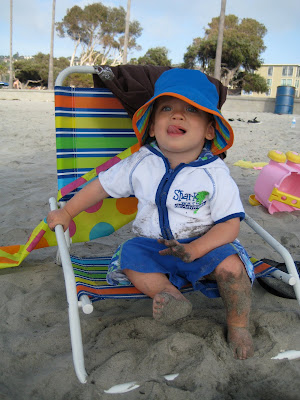 He can charm women, young and old, with that dashing debonaire smile. (Is that a Badger bite I see?) 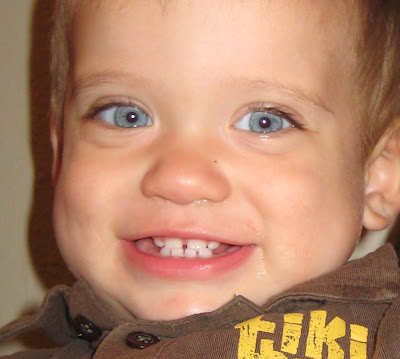 And though he pretends to be so innocent, sometimes he nonchalantly pulls some sneaky moves on us. One example is captured below. As I was taking a picture of Brooklyn's puzzles, he, oops! happens to grab and drop one little piece, then another, and soon puzzle parts are flying across the room. It's no wonder that Brooklyn takes discipline matters into her own hands behind my back! 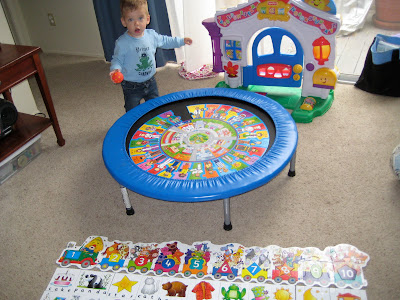 Ian also might be into sports someday like his dad and uncles. One of his favorite few words is "ball." He usually carries one around. Whenever we visit a toystore, you can bet he'll find the balls and test them all out, sending me chasing them around in all directions. I guess I'm asking for it by allowing him to sample them all, right? Another favorite word of his is "throw!" as he tosses the ball ahead of him. It used to be that he'd usually drop it behind him somehow before it cleared his head in an overhand throw. Now the ball makes it past his head and into the air in front of him, but that's not enough. He has also learned how to make loud noises by throwing balls at things. His favorite target? The large sliding glass door in our living room.
His other talents include:
1. Singing and ballerina style dancing to Primary songs
2. Enforcing a schedule of outings with his mom and sister by demanding, "Let's go!" when he's ready to walk out the door and occasionally locating and placing my shoes on my feet for me
3. Properly welcoming and waving good-bye to friends, neighbors, and strangers
4. Doing some actions/sound effects to primary songs like the kiss at the end of "Daddy's Homecoming" and the loud jumping during "Jesus Wants me for a Sunbeam."
5. Cleaning his own hands at the end of meals by wiping them through the hair on top of his head.
6. Climbing into his high chair independently
7. Making huge splashes during bath time despite his mothers best efforts to mitigate this behavior. Once I took away the big rinsing cup from him after repeatedly telling him to not throw it around and make big splashes. The second I took it away, he proudly then used his leg to stomp into the water.
Posted by Desirae Badger at 10:38 PM