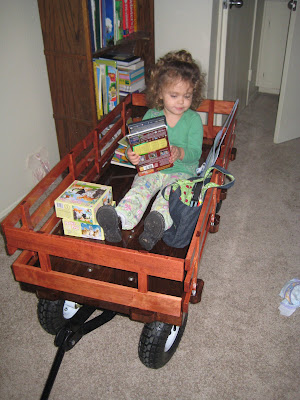 Sunday morning Mark and I got on the road again headed back for AZ and CA.  This trip was a little more taxing than the one out to Louisiana.  Mark had spent the previous night with the runs and finally throwing up right before we left.  Alyssa also had thrown up the night before.  This time I was feeling much better so I drove the lion's share on the way home.  Mark had downloaded some Tom Clancy books on his ipod so we enjoyed one on the way out and one on the way back.  Brooklyn had a few melt downs.  One where she unbuckled herself out of her car seat and hugged my neck as she cried.  She was crying because I would not let her sit on my lap.  That episode ended when Brooklyn ripped one in my brother's face.
The next morning after arriving to Maricopa, I loaded up our wagon and got in the car....and it wouldn't start.  I thought it might be the battery so I took the battery over to Autozone to get it tested.  The battery was just fine.  I put the battery back in, unloaded the car, and called my insurance company to get the car towed to nearest volvo dealer for repairs.  Before the tow truck arrived, I got in the car and tried to start it one last time....and guess what... it started!  So I loaded the car back up with it running, cancelled the tow truck, and took off.  I was a little nervous when we had to stop 15 minutes later and fill up with gas, but no problems.  We made it back to San Diego in a little over 5 & 1/2 hours.
Tina was there when we arrived and she had brought Brooklyn a nice surprise... a hand crafted, one of a kind, Jim McKendrick specialty wagon!  Completely custom with room enough for four.  Thanks, Jim.
Posted by Desirae Badger at 5:31 PM

So cute! I am completely coveting that wagon! ...And coveting living in a place I could store and use it, of course. :) Thanks for the updates, I've been missing you guys!