Hopefully he doesn't mind my "cute" title.☺
Anyone up for some traditional Badger birthday cake... 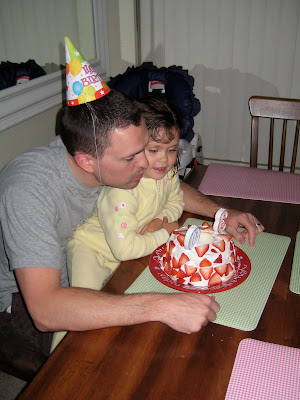 and thrice recycled hats?
Stephen was a really good sport to enjoy his very quiet and low-key birthday. Sadly, since his was the last of three immediate-family birthdays in a five-day period, we were a little bit partied out. On Friday, his actual birthday, he took a half-day off from work, and enjoyed a nice nap. The next day, Saturday, we were supposed to go kayaking. Unfortunately, because I didn't book the reservations far enough in advance, we had another very low-key day of house-cleaning and laundrying and beach wandering (see next post). Our kayak tour took place on the following Monday instead. (Another half-day from work - oopsie!) 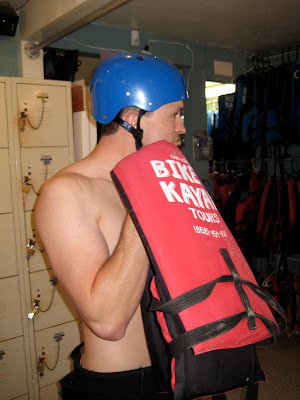 For some reason, the blue plastic hats cracked me up. I had to take a picture.
While we waited for our tour to begin after checking in, we had lunch at a corner deli and we were totally mistaken for tourists. Maybe it was because I was carrying about 7 brochures of attractions for future adventures around here. All in all, the tour was exhilarating, educational and now highly recommend (by me.) It was the kayak tour of the 7 caves of La Jolla. We didn't go in any caves, but we learned a lot about the history and science behind them and the cool ecological reserve where we always go swimming. The funny thing is, about 12 different vendors offer the same tour and if took us a minute to find the correct location of our touring company. Talk about some stiff competition! 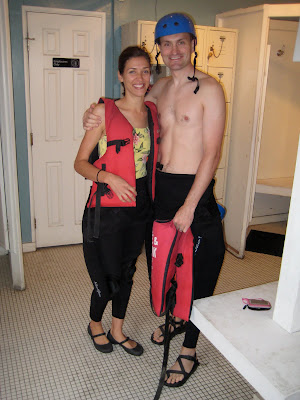 We did get tossed overboard as we tried to paddle past the crashing waves. It was quite a rush! I was much braver kayaking than I was snorkeling, that's for sure! Maybe it's because the kayaking was being supervised by our tour guide. (Incidentally, it was just the two of us in our group with the guide.) I was bummed that I couldn't take my camera on the actual tour. In the end, I was glad that I didn't try to sneak it because it would have been long gone! I didn't quite get the translation that their warning about us getting "wet" on the tour meant that we would actually get SOAKED and potentially, DUNKED! We recovered quickly though and remembered how to get back into the kayak. After that, it was smooth sailing. I hear the kayaking tours around Mission Bay are a little less turbulent... maybe next time. Nah! I like the surprise dunk, it really kept me on my toes! And we did see a speckled shark! Very cool! It was at least four feet long. Now I know why I was a little nervous to be snorkeling here the week before. (Especially since both Stephen and I were completely clueless about what we were doing!)
P.S. Not that it hugely matters, but the arms of those wet suits in the picture are hanging down and making our thighs look a little funkdified....So no, it's not the return of MC Hammer pants, wet-suit style in case you were wondering.
Posted by Desirae Badger at 9:12 PM

How does it feel to hit the big one?