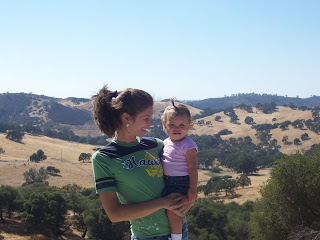 We spent a week at this great ranch near Stockton with some of Stephen's siblings and their families. Mark and Tracy's Family, TJ and his boys, and Eric all went up to Tracy's grandparents' ranch. Our days were filled with lounging in the pool, frequenting the local bead stores in town, assembling giant jigsaw puzzles, feeding the horses, and venturing out on wild truck rides. In the evenings we shared delicious dinners (and desserts of course!), played games, and watched movies!
Here's a front view of the main house with the big square pool in the front. It was filled with this milky blue "mystery water" which did not get circulated through a filter making it completely opaque. 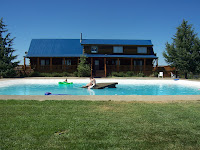 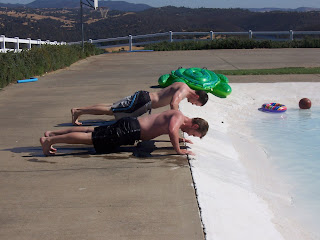 Here Stephen and his brother Mark attempt an intense afternoon workout by the pool combining a swim with some good ol' push-ups. Mark is training for a marathon and Stephen- well - he just likes to show off!
The boys also like to play a king-of-the-mountain type game in which they would see who could last the longest on the floating raft in the center of the pool. The would run to different corners and try to push eachother off, then see who would be the last man standing. Dangerous? Yes. Competitive? Of course! Were the moms all worried that the kids would be tossed aside and gone forever or at least permanently and frightfully injured? Most certainly.
One of the games got so rough that the flat carpet got torn off the raft. If you look closely in the center of the middle picture, they are in the middle of repairing it with needles and thread!
Posted by Desirae Badger at 2:57 PM

when doing push-ups, hold your head up and your butt should be up a little bit also. :)

You guys look like you are puking in a sit-up position . . . intense.